MAP10: Lockdown is the tenth map of Doom 2 Unleashed. It was designed by James Cresswell (Phobus) and uses the music track "The Dave D. Taylor Blues" by Robert Prince.

When using the music WAD included with this megawad, this level instead uses the music track "Happy March" by Paul Corfiatis. 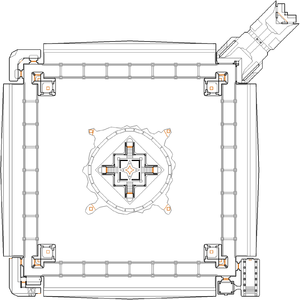 Map of Lockdown
Letters in italics refer to marked spots on the map. Sector, thing, and linedef numbers in boldface are secrets which count toward the end-of-level tally.

You start on the south-west corner of a large square walkway. The walkway surrounds a cross-shaped building guarded by eight arachnotrons who can shoot you if you spend too long in the open.

Head east past a number of monsters, taking a super shotgun on the way, until you reach the south-east corner then go through the east door to a room with metal columns. Turn right and follow the narrow path until you reach the wall, then go down the steps and turn left to kill two or three revenants guarding a skull switch. Press the switch then return to the walkway and go to its north-west corner, going through the north or west doors to confront a Hell knight and some imps as well as two revenants on Ultra-Violence (UV) and Nightmare (NM) skill level. In the north-west corner you will find a baron of Hell guarding a rocket launcher and a second skull switch which you need to press.

Go to the north-east corner of the walkway, ready to kill any demons teleporting in from that area, then head north-east across a bridge and through an open door until you reach a window through which you can see the red skull key. Kill the two mancubi overlooking the area, then step through either doorway next to the window so you can reach the red key. Approaching the key will lower two walls behind you revealing two spectres and/or revenants depending on skill level.

Backtrack to the start point, watching out for two or three revenants that have teleported on to the bridge leading to the red key area. Go through the west door with red skull markings, drop to the floor below and turn left to kill some approaching revenants and spectres. Go round the corner to find a mancubus waiting at the top of some stone steps, kill it and press the switch it was guarding to raise a lift by the red key door. Go back to the red key door and press another switch in the north-west corner to lower the lift, then ride it up and go through the doorway to the south to find the yellow skull key. Watch out for any overhead chaingunners on the ledge to your right.

Go back through the red key door and open a second door in front of you to find a teleporter, which will send you to the central structure with the arachnotrons. Take the plasma gun in front of you and climb the brown steps, but use caution as the windows of the building have opened to reveal a number of chaingunners. Go through any of the doors, ready to kill any waiting revenants as well as an arch-vile that teleports on to the patch of sky at the bottom of the steps. Once the way ahead is clear, step on to the patch of sky that the arch-vile came from to finish the level.

At the south-east corner of the walkway, step through the south door to trigger a crushing ceiling. A berserk pack can be seen behind the crusher; as the crusher rises, you have just enough time to take the berserk and step back before the crusher lowers again.

This level contains the following weapons and items in deathmatch and cooperative play:

* The vertex count without the effect of node building is 2616.