MAP10: Lucid Nightmare is the tenth map of Midgard Outlaw. It was designed by Mike MacDee (Impie) and uses the music track "". 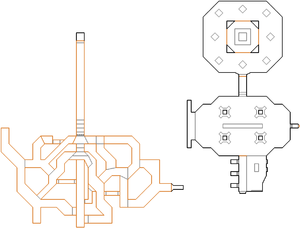 Map of Lucid Nightmare
Letters in italics refer to marked spots on the map. Sector, thing, and linedef numbers in boldface are secrets which count toward the end-of-level tally.

Juno has reached Dr. Zaal's offices, but she must face him while still suffering the effects of the drugs.

The offices appear to Juno as a hellish green labyrinth filled with demonic dogs. Move forward to open the rest of the Dog Maze, then kill all the dogs to prevent any from sneaking up behind you later. In the northwest corner of the maze is a Vampire Matron whose death will open the flesh gate that leads to Zaal's lab. Make sure to grab the ballistic knife in the Vampire Matron's corner of the maze, and the super stim in the cage near the flesh gate.

Once in the lab, the hallucinations finally seem to subside, and your enemies revert to the usual twisted humans and robots. Kill Dr. Zaal to open the way to the exit switch, but beware the Vampire Matron that is unleashed when you do so.

Once you enter Zaal's chamber, the lights go out, and you are sealed in with him. Thanks to the lingering effects of the drugs, Zaal seems to teleport around the room as he blasts you with a tazer and a powerful dart gun.

Dr. Zaal doesn't take much damage and relies on his teleport trick to get the drop on you. Keep out of the center of the room and unload on him from afar with the Gungnir or ballistic knife (just don't forget to collect your blades afterward).