MAP10: New Front Base is a level in Strife which replaces MAP07: Castle after the Programmer is destroyed. It uses the music track "March".

Basically, this level is a replica of the castle but is controlled by the Front and has a few structural differences. Accesses to the training facility and the Programmer's keep are now blocked and the entrance to the audience chamber is replaced by a headquarters where Macil resides. Just across the HQ is the hospital where the player can find the medic Gerard and the trainer Feris, as well as a person named Justin who sells ammo and teleporter beacons. Near the main gate that leads to the town, there is a teleporter that leads directly into the HQ. Later, the player can access the new Front base from the borderlands as well. A teleporter can be activated in the central yard of that level, and it leads into the HQ of the Front base.

Later in the game, Macil becomes a boss that needs to be killed. If the player attacks him at any point after the castle has been conquered, the rebel troopers will help the player, although Macil is invincible to the troopers' attacks. 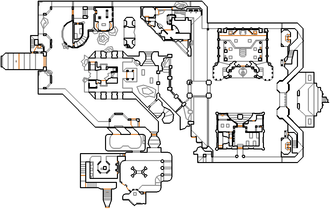 Map of New Front Base
Letters in italics refer to marked spots on the map. Sector, thing, and linedef numbers in boldface are secrets.

After defeating the Programmer in his keep, you will awaken in front of Macil in his new command center. Talk to Macil and he will tell you about the power of the Sigil, before instructing you to find the Oracle to learn the locations of the other Sigil pieces. Head south down the stairs and through the silver door to leave the command center.

If you go south into the building marked "Hospital", you can go through the left door to find Gerard, while Feris and his assistant Justin can be found through the right door. When you are ready to leave the base, head west across the bridge and go north around the building ahead. Once you pass the building, keep heading west through the large gate that leads back to the town. Before going down the stairs to leave the level, turn right and go through a small door - the teleporter here lets you teleport to and from the command center without having to walk through the castle.

Later on, after you return to the Oracle with the second piece of the Sigil it will tell you that Macil holds the third piece and is a threat to you. When you return to Macil, you can speak to him and he will assure you that the Oracle is the one who cannot be trusted. At this point you must decide whether to keep trusting Macil or heed the Oracle.

If you decide to trust the Oracle, Macil will attack you; kill him with any weapon and then use the Sigil to destroy the spectre that emerges from his body. Once this is done, you will receive the third Sigil piece and will be directed to return to the Oracle.

If you decide to keep trusting Macil and destroy the Oracle (plus the spectre that was controlling it), BlackBird will tell you to return to Macil who has new orders. Macil will now direct you to shut down a factory that is being used by the Order to convert humans into its soldiers. You are given a brass key in order to reach the Order commons and find the Front's second-in-command Richter.

After shutting down the factory, BlackBird will alert you that Macil has "gone nuts" and knowingly sent 200 men to their deaths, prompting you to return to him at once. When you return to Macil, talking to him will reveal that he is indeed being controlled by a spectre as the Oracle said. As above, kill Macil and then destroy the spectre using the Sigil, which will leave behind the fourth Sigil piece in this case.

On the western side of the moat, there is a gate with statues on high platforms. When you enter the staircase to the southeast and continue to the south inside the building, you will eventually find a blockade with a little room. It contains 50 gold coins, phosphorous grenades, poison bolts and two bullet clips.

Four disappearing dead acolytes (Things 19, 20, 21 and 22) have no flags set for any of the three difficulty classes, so they never appear in the level to begin with. Teleport map spots 1 and 3 (Things 91 and 96) also have no skill flags, but because of special handling in the engine, they function normally in the level.

* The vertex count without the effect of node building is 2929.