MAP10: Ode to everything is the tenth map in the DMP2013Z.wad mapset of Doomworld Mega Project 2013. It was designed by Scypek2 and uses the music track " ". The par time defined in MAPINFO is 10:00. 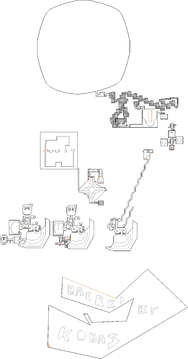 Map of Ode to everything
Letters in italics refer to marked spots on the map. Sector numbers in boldface are secrets which count toward the end-of-level tally.

Two zombiemen (Things 497 and 498) and six spiderdemons (499 through 504) in the southernmost "hacked" area have no flags set for any of the three difficulty classes, so they do not actually appear in the level. The same goes for a dead cacodemon (508) in the westernmost MAP01-like area.

* The vertex count without the effect of node building is 4751.