This level was also ported to PlayStation Final Doom as MAP30: Onslaught, and is the final level of that game. 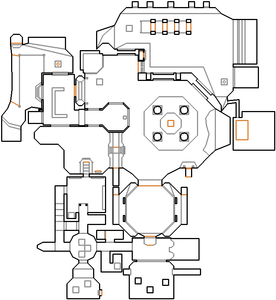 Map of Onslaught
Letters in italics refer to marked spots on the map. Sector, thing, and linedef numbers in boldface are secrets which count toward the end-of-level tally.

As soon as the level starts, kill the chaingunner behind you and take his chaingun then collect a nearby partial invisibility. Head north-west until you reach a fenced structure with the blue skull key at the end - you must walk under the stone arches to reach the key, but several doors concealing chaingunners will open around you as you advance. You can advance slowly and kill each chaingunner as they appear, or head straight for the key - which will open a fire wall behind you revealing two to five cacodemons - and provoke them into fighting with the chaingunners.

With the blue key, leave the fenced area and head west towards a door next to some blue skull bars. Open the door and press the button behind it to lower the bars, then step past them with caution - a wall in front of you will lower revealing revenants, along with a second wall behind you that hides one or two arachnotrons.

In the next area, proceed south past some mancubi, past a pavilion with four pillars, to an octagonal arena. The walls on both sides will lower to reveal chaingunners, but ignore them for now as they will be resurrected by concealed arch-viles. Go to the door ahead and open it to confront a baron of Hell, dispatch it then press the gargoyle switch it was guarding to drop into a sewer with some demons.

Head due west until you reach a circular junction with a couple of shotgun guys then go south to a small room with one or two Hell knights. Flip the switch in the south-east corner then go back to the junction, turn left (west) and follow the tunnel up to a computer room containing a rocket launcher. Go through the north doorway and pass through a wooden barrier that lowers at the top of some steps, then turn round and flip a switch behind you - arm yourself as this will allow the arch-viles that were concealed in the octagonal arena to teleport out. Head under the low rock on your left to get back to the pavilion area and head towards it, where the platform holding the yellow key has lowered.

Taking the yellow key will cause various enemies, including one or more pain elementals, to teleport to the pavilion area. Dispatch them then head west towards a yellow key door at the top of some steps, go through then turn left and left again to find the red skull key along with a super shotgun. Go back to the pavilion then head south to a gargoyle switch between two red skull bars and open it to find a zombieman guarding a button. Press the button then go back through the yellow key door and straight forward through a second door that has just opened, then turn left and head round the fence to the exit door - as you advance, watch out for ambushes by knights, barons and shotgun guys around you.

You can cut out the sewer area and the yellow skull key entirely by accessing the red skull key via the window rather than the traditional route.

The yellow skull key door has two "posts" indicating that it requires the yellow key immediately outside. Use the steps to get on top of the post nearest the window; then strafe-run through the window to get to the red skull key.

This trick was used by (at least) Juho Ruohonen (ocelot) in the record below.