The author of the original level was Tom Mustaine. Changes for the PlayStation port were authored by Tim Heydelaar.[1] 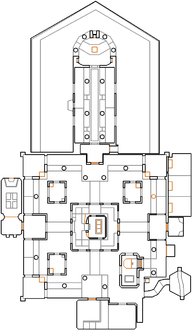 Map of Paradox
Letters in italics refer to marked spots on the map. Sector, thing, and linedef numbers in boldface are secrets which count toward the end-of-level tally.

Go west through the door, then head north up a staircase. At the top of the staircase, travel west and go through the door in the north wall. Go north through the long hallway and take the yellow keycard sitting on the marble platform at the end of this hallway.

Go south and head back through the door you just came through. Go west and then south down a staircase, and open the yellow door in the west wall. Go into a small room and head north - a metal wall in front of you will rise to reveal a revenant. Press the switch behind it, then leave the room and go east across a bridge to enter the central tower. Climb the staircase in front of you to enter a chamber with three teleporters - step into the pad on your left, which will send you to the building north-east of the tower. Step forward and a pillar in front of you will lower to reveal the blue keycard.

Jump out of the south window and climb back up to the central tower. Return to the chamber with the three teleporters and step on the pad on your right, which will send you into the building south-west of the tower. As before, step forward and a pillar in front of you will lower to reveal the red keycard.

Jump out of the north window, then return to the start point. From here, go south to a walkway, then go west across a small bridge and open the three locked doors in front of you. Lower the lift (watching out for the revenant standing on it) and use the lift to get into the building. When you step off the lift a metal wall will rise to reveal two chaingunners - kill them and run east through the opening they were guarding to reach the exit switch.

After opening the room with three teleporters, step on the center pad to go to the building north-west of the central tower. Stepping forward will lower a pillar holding a berserk pack.