MAP10: Playgrounds of Caesar is the tenth map of Whispers of Satan. It was designed by Paul Corfiatis, who also wrote the music track for this level, "Plessure". 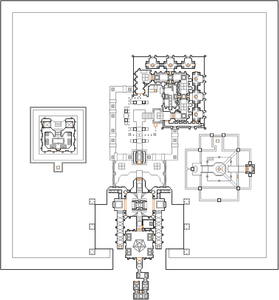 Map of Playgrounds of Caesar
Letters in italics refer to marked spots on the map. Sector, thing, and linedef numbers in boldface are secrets which count toward the end-of-level tally.

Kill the Hell knight at the start and go up the stairs and through the door to head inside. Head around the bend and open the door on the right. Inside this room with waterfalls, press the switches on both ends of the room, then head back into the hallway and head right. Around the next bend, go to the right door, and do the same thing again in the next room, then get back into the hallway. Now open the door in front to find some blocks are raised so you can get the yellow skull key. Get it, and return to the hallway through the north door. To the left is the yellow door and you will be back outside. Head to the end here and press the switch to reveal a path of pillars. Follow this path to obtain the red skull key. Now head for the red door to the south, where enemies are teleporting around. Open this door and move past the crusher into a room where the blue key rests in the center of a pillar around the wall. Head for the eastern part of this room and enter the small corridor to flip the switch. This opens up a hall with demons. Kill them and enter the teleporter. In this area, you can get a plasma gun in the water to the right, and head around the block to find a switch. Flip this switch but watch out for the enemies that teleport in. Get on top of the block and open the door to the east to find another switch. Press it and take the teleporter back to the room with the blue key. Now go to the western side and repeat what you just did as it is the same. On the other side of the teleporter, go around the building and press both switches to open the way inside. Press the switch with blue symbols around it to finally lower the blue key, then head back and retrieve it. Go south and open the blue door. Kill the shotgun guys and barons of Hell in this room, and to get to the exit, you need to press all four switches. Be ready to fight an arachnotron after each switch press, and then go through the rooms until you find the exit switch.

* The vertex count without the effect of node building is 4868.