MAP10: Power Core is the tenth map of Simplicity. It was designed by Melissa McGee (Agent Spork) and uses the music track "Aliens, Say Your Prayers!", originally composed by Robert Prince for Duke Nukem 3D. The par time defined in MAPINFO is 8:42. 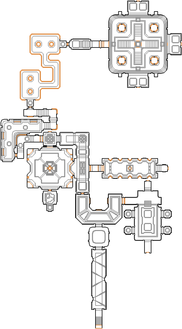 Map of Power Core
Letters in italics refer to marked spots on the map. Sector, thing, and linedef numbers in boldface are secrets which count toward the end-of-level tally.

Use the super shotgun in front of you to kill the three imps, then open the door ahead to enter a courtyard with imps, demons and a baron of Hell. Open the sliding doors at the north end to find two chaingunners guarding an armor, then go up the east steps to a corridor filled with imps, demons, shotgun guys and more chaingunners. Follow the corridor until you see a green door on your left, open it to confront two revenants then go down the steps to a room where several imps and cacodemons will appear (the entrance will seal behind you, and the game will autosave at this point). Fight your way to the east end of the room to reach a switch, then flip it to lower a pillar in the middle of the room holding the red keycard. Taking the key will break the power cores on the walls and release damaging radiation into the room - quickly flip all ten switches that appear under the cores to stop the radiation leak and re-open the entrance.

Go back into the corridor and head south to a locked door, then open it to enter a U-shaped hallway containing a Hell knight followed by imps and two revenants. Open the split door on the east side of the hallway to confront two demons and some more imps guarding a rocket launcher (the game will autosave again here), then use this weapon to kill the enemies on the floor below who are protecting a megaarmor. At the south end of the room is a switch guarded by a baron of Hell - flip the switch and kill four revenants that are released from compartments on either side of the room, then go up the steps to find that a door has opened revealing a berserk pack and a second switch. Go back to the U-shaped hallway, where a door has opened to reveal two revenants and a plasma gun, then return to the courtyard near the start of the map where four switches have risen around the central core; flip all four switches to disable the core and raise walls in front of the exits, then slay three waves of cacodemons that spawn to lower these walls so you can leave.

Go through the sliding door again and open the split door on your left to confront a nightmare demon (the game autosaves here), then go round the corner to find two more nightmare demons next to another door. Open this door and follow the next passage past imps and knights to a staircase, go down it to find two more nightmare demons guarding a door then open the door to dispose of a third demon as well as imps and shotgun guys. Follow a tunnel east and north to confront some more imps, then proceed east through another door to confront two revenants blocking your way to a split door. Open the door and step through it to a square arena with imps and cacodemons (the game autosaves again at this point), then flip the switch on the east wall to open a compartment with revenants, nightmare demons and more imps. Flipping the switch inside this compartment will open a second compartment to the south with two mancubi, and flipping the third switch in that compartment will open another one behind you with two arachnotrons and another berserk pack.

Flipping the switch inside the arachnotrons' compartment will raise a pillar in the middle of the room with four lion switches, and pressing all four of those switches will lower the pillar again and reveal the goat lord inside it (another autosave is performed here). Unload the plasma gun and rocket launcher into it, keeping your distance to avoid the red projectiles it throws; the goat lord can also teleport to the red light panels at the edges of the room to pursue you. As the goat lord takes damage it will teleport to the middle of the room and summon nightmare demons, or release homing fireballs from launchers positioned above the arena. Once the goat lord dies, the power cores in the room will explode and you will only have 30 seconds to escape the map; run back to the U-shaped hallway then head south through a corridor that has opened to a dark tunnel, where the level will end.

* The vertex count without the effect of node building is 3564.

This level contains the following numbers of things per skill level, not including monsters spawned via Thing_Spawn or similar functions: