MAP10: Problem Areas is the tenth map of 2048 Unleashed. It was designed by xnv and uses the music track "In The Dark" by Robert Prince. 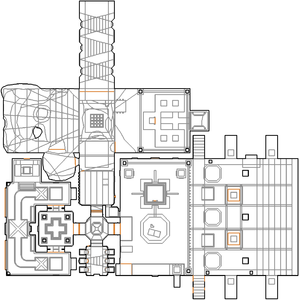 Map of Problem Areas
Letters in italics refer to marked spots on the map. Sector, thing, and linedef numbers in boldface are secrets which count toward the end-of-level tally.

Step forward to collect an armor underneath you and kill two zombiemen, then shoot the switch in the north-west corner to open the way out. Step through the door to a blue crossroads with an imp then turn left and go through the west door to a grassy area with a shotgun - the door will seal behind you as you enter. Turn left or right and go through either of the open doorways, ready to kill a number of zombies and demons that teleport in, then follow the path round to its west side to find a switch under a metal grate which will lower a platform to your left with two shotgun guys and one or two revenants - two closets containing Hell knights or barons of Hell will also open, and imps will teleport in to the area. Go to the platform you just lowered (collecting a chainsaw next to it if needed) then press the switch behind it to lower a pillar holding the blue keycard.

Return to the blue crossroads and collect a supercharge that has appeared then head through the east door to find a chaingun - the door you just walked through will seal, and the walls around you will lower to reveal a large chamber. Kill two chaingunners standing on platforms to the north then press the switch in the north wall which will lower a metal column behind you, as well as raising three platforms to your right with two mancubi and a revenant. Once the column has lowered to reveal an arachnotron (or revenant on Ultra-Violence (UV) and Nightmare (NM) skill levels) step on it to find another switch which will lower a wall in the south-east corner of the chamber and reveal the red keycard. Kill the cacodemons (and pain elemental on UV and NM) that are released into the area then use the lift in the south-west corner to reach the key.

Return to the blue crossroads and collect the megasphere that has appeared then open the two north doors which require the blue and red keys. Collect the super shotgun and backpack in the next room then press the switch in the north-east corner - the room will start to lower and you will need to fight off a large number of zombies and imps while you wait to reach your destination. At the bottom approach the large door in front of you then turn left to go through a doorway into a dark cave with some imps. Head north until you hear a revenant on your right then turn right and approach the tan door in front of you - the door will not open, but from here you can climb on to the revenant's ledge then climb some steps to the large door you saw earlier, which has opened to reveal some imps.

Turn left and step through a hole in the brick wall to enter another cavern where some demons and imps will teleport in, plus two barons on Hurt Me Plenty skill level or higher. Approach the gray block in the middle of the cavern to find a switch on its east side which will lower a lift ahead of you, then ride the lift up and step into the wide tunnel on your right to finish the level.

A berserk pack can be found next to a crate in the red key chamber, along with three boxes of bullets.

* The vertex count without the effect of node building is 3523.