MAP10: Processing Station 10-29:71 is the tenth map of the Newdoom Community Project. It was designed by Liam McMullin (Aliotroph?). 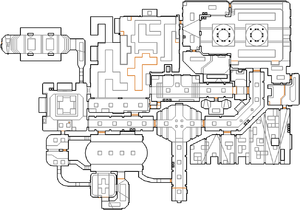 Map of Processing Station 10-29:71
Letters in italics refer to marked spots on the map. Sector, thing, and linedef numbers in boldface are secrets which count toward the end-of-level tally.

Head into the lobby and take the eastern door. Take the first door that you see on your right to enter the storage room. Maneuver through the crates to the door to the northeast. Inside this room, hit the switch directly left of the door. Now go back to the lobby and head back to your starting point. There should be a door to the west which you should go next. Follow the path all the way around (do not fall down the chasm along the way or you will die). Ignore the red door and keep going until you find a switch by a lift (if you did not press the switch after the storage room earlier, this switch will be blocked off). Grab the blue key and return to the lobby, taking the east door again into the hallway. Take the door at the end of the hallway with the blue markings into a room with two generators. Go to the steps to the north and go through the door west. In this L-shaped room, take the southern door and go behind the computers to get the red key. Now take the other door in the L-shaped room to a big computer network. Maneuver through the ground floor until you find an opening in the southeast to another room. There is a red door just to your right if you enter from this direction. Go through this door, ride the lift up and to the next room, and then take the next door to your left. This next room can access the lobby through the red door to the east. The southern door here leads to the opposite side of the chasm. Go west and then north to a switch which opens up the exit door in the distance. Now backtrack to the big computer network and find an opening in the southwest on ground floor then go through the exit door you saw. The exit is just a short way through this door guarded by several monsters.

* The vertex count without the effect of node building is 2585.