MAP10: Redemption is the tenth map of TNT: Evilution. It was designed by Tom Mustaine, who also composed the level's music track "Infinite" shared with MAP18: Mill.[1] 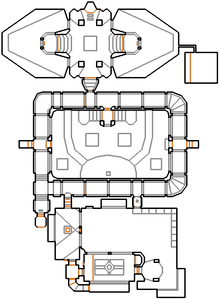 When you enter, you should see a building to your right, with the entrance visible through the window. The first weapon can be collected from the former sergeant near the entrance, along with a box of shells. You can also get a double-barrel shotgun as well.

The first ambush is sprung when you approach the western edge of the interior room. Various lesser demons will shoot at you from the southern platform, and a Hell knight is released from the eastern alcove. Deal with them, or flip the switch on the left and run through the door. Lower the lift to continue and kill the chaingunner on the lift.

To the north is the red key door, which you can't use yet. There is also blue armor, but collecting it may release monsters on the western wall, and also releases a mancubus in the south-east corner of the map. Flip the switch to raise stairs to the northern section.

You need to collect the yellow key first, and it is located on the northern-most part of the map. After going up the stairs, follow the right corridor until you reach a red-colored barrier, then turn right.

The next room has two arachnotrons next to the plasma gun, and two revenants waiting to ambush you as soon as you enter the room. There are also two pain elementals on the sides of the room.

To reach the yellow key, you need to enter the two sides. Entering a side raises a switch, which must be used to raise the platform to the yellow key. When both switches are ready, get the key. Once you do, monsters will begin to teleport into the center of that room, including a baron of Hell.

Note that entering the northern area will release four chaingunners at the entrance.

The final section is in the center of the map. When you enter the room itself, two mancubi and eight sergeants will appear in the room. Get the red keycard at the southern end of the room simply by touching the pillar.

While there are five secrets, they appear in one cluster:

Two of the three super shotguns are only accessible in deathmatch mode (or by using the idclip cheat), but aren't tagged as multiplayer only.

In multiplayer deathmatch, one of the respawn points is rigged to seal off the northern and southern sections of the map. In addition, two respawn points will open alternate entrances to the center room.