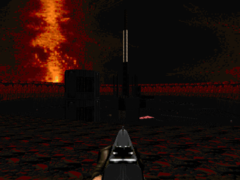 MAP10: Skagway is the tenth map of UAC Ultra. It uses the music track "Astral Dreadnought" by James Paddock, which originally appeared on MAP10 of Plutonia 2. 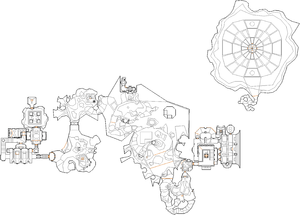 Map of Skagway
Letters in italics refer to marked spots on the map. Sector, thing, and linedef numbers in boldface are secrets which count toward the end-of-level tally.

This map can be nearly incompletable on cooperative settings if all the radiation suits are used up due to the large amount of damaging floors. Thankfully, once the high radiation canyon area of Skagway has been completed, a teleport pad opens near the starting room which will teleport respawning players to the subsequent parts of the map beyond the canyon area. If the radiation suits are used up, players will need to utilize speedrunning behaviours such as wallrunning and straferunning in order to reach the end of the canyon before dying of radiation exposure.

Pick up the shotgun and head through the door. A couple of demons will be in your way and several imps are on ledges to your left. Dispose of them and progress along the path, killing the mancubi in the next segment. The path winds to a switch, flip it and backtrack, looking out for some new enemies down a new path. Follow this path to a big room with several more enemies. There is a super shotgun at the southern end of this room. When you are done, head for the door to the west. Make sure to grab the radiation suit here, as the next part involves going through red caves, and the air around here is too hot to step through normally.

Flip the switch to lower yourself to the red caves. You will be fighting several monsters as you go through these caves, and there are spare radiation suits around if you need them. For now, press the switch you see to your left to lower a portion of rock, with several imps behind it. Progress through them, but look out for revenants as well as more imps to teleport behind you. Keep going, taking a detour to the plasma rifle. You will eventually find yourself outside, with loads of enemies out here. You need to head onto the ledge where the imps are; there is a pressure plate here, lowering more rocks so you can keep going. The next area has a load of monsters still, and you want to head through the open door held by the crate next.

Kill the mancubus and chaingunners in this area, making sure to press the switch, then return outside. A section of wall to the northwest is open allowing more progress through the open valley. You will need the megasphere to deal with the mancubi, barons, and Hell knights in the next area of the valley. Locate the next switch to flip near the stack of crates in this region. This switch opens up the wall south with more Hell knights and barons around it, and there are more caves behind this wall. You will actually have to head down into the lava (make sure you always have your radiation suit handy). There is a pressure plate near some blocks you can traverse, so head up to it. Look out for a wall of revenants to appear as you step on it, then climb back up and continue traversing the cavern. You will eventually reach a door, but look out for a pair (or trio on Ultra-Violence and higher) of arch-viles behind you as you approach it.

This door leads out of the damaging caves, so head through here and through the next door down into a large room with a mancubus and several imps. There is a lift here, but ignore it for now and continue up the steps to a door and a lift. Ignore this door for now and take the lift down. Two barons and some chaingunners guard the red key. Now ride the lift up and open the door, pressing the hand panel. You will be at the ledge overlooking the large room before, with some shotgun guys here and chaingunners teleporting as well. There is a soul sphere to the west, so take it and run to the red door to the east. Kill the mancubi and demons along the way until you head back outside. By now, your radiation suit may have worn off, so quickly get the one outside here but look out for the two arch-viles guarding it. The next door here has a berserk pack, spectres, and a teleporter to the final area.

Climb the rocks after you teleport, getting rid of minimal resistance along the way. You will find what appears to be a large control tower. As you approach, several arachnotrons teleport in. Head straight for the tower, and use a lift to go up. You will need to press four switches, each appearing in a counter-clockwise fashion, and the exit will lower. While it is doing so, two cyberdemons will also teleport outside, so kill them while you wait (do not worry about your radiation suit running out here, the ground is not damaging in this area).

* The vertex count without the effect of node building is 4375.

This map had undergone drastic changes, particularly in the outdoor canyon area. Some screenshots which can still be found in the UAC Ultra development thread at Doomworld Forums show parts of the map that had been deleted completely. This was mainly due to the natural rocky terrain that was designed for it did not accommodate to the exciting slaughter-like gameplay that was later planned for it. Attempts to manipulate the area to correspond with the style of play that was desired offered less than satisfactory results, and thus the entire canyon was erased and redone from scratch. Jon Vail did a majority of the mapping though Super Jamie is credited to assembling much of the monster and item placement for this map.

On linedef 4469, there is a texture on the wall that has a message violently scribbled on it that reads, "Digital Dogs with Analog Collars." This is a song title from the band Trap Them, which is one of Jon Vail's many favorite bands, on the album Sleepwell Deconstructor. The full title is "Day Seven: Digital Dogs With Analog Collars."