MAP10: Subterraqueous is the tenth map of 1000 Lines 2 - Community Project. It was designed by Nootrac4571 and uses the music track "Lion Heart" by Brayden Hart (AD_79). 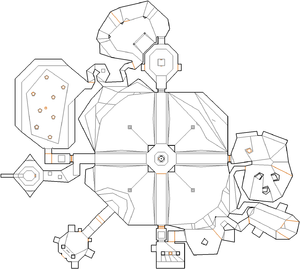 Map of Subterraqueous
Letters in italics refer to marked spots on the map. Sector, thing, and linedef numbers in boldface are secrets which count toward the end-of-level tally.

Walk forward to a shotgun then pull the lever in front of you; the platform you are standing on will lower, along with two ledges to your left and right holding imps. Once the platform reaches the ground, kill the imps in front of you then follow the tunnel to a giant cross-shaped bridge guarded by zombiemen, imps and a Hell knight. Head across to the east side of the bridge (collecting a chaingun on the way) and open the shutter door here to enter a cave with some imps, then head up the steps until you reach a super shotgun and armor; approach these items with caution as there are knights and/or revenants hiding in the surrounding columns. Go north-west from here into a narrow doorway and follow the path past some zombies - you will come to a cavern with a U-shaped walkway guarded by zombiemen and a mancubus, as well as demons on Hurt Me Plenty (HMP) skill level or higher.

Head round to the south-east side of the walkway to collect a supercharge, which will open three monster closets containing imps and shotgun guys (plus revenants and a chaingunner on Ultra-Violence and Nightmare) then continue west to the next cavern where two walls will open to reveal an arachnotron guarding a rocket launcher as well as (depending on skill level) imps, demons or another arachnotron behind you. Step on the lift behind the rocket launcher to go down to a room with some zombies then open the north door to get back to the cross bridge; you can now head to the north side of the bridge where another door has opened, but watch out for demons approaching from that direction as well as four imps and/or revenants that teleport to four columns around the bridge. After going through the north door, flip the switch in front of you to lower the surrounding walkway and release some more demons, then get on the walkway and go through the north doorway.

Kill the demons and cacodemons approaching from your left, then follow the trail of rockets in front of you until it ends at a water stream; arm yourself before stepping over the water as a ledge with imps will descend in front of you and one to three mancubi will appear on a platform to the south. Continue following the path south and west past some zombies and imps (replaced with a knight on HMP or higher) until you reach a cave with several crushing columns, then flip any of the switches in the middle of the water to lower the surrounding walls and reveal several mancubi - kill them while you wait for a barrier in the south wall to lower and reveal a lift, then step on the lift to be taken down to some zombies guarding a shutter door. Open the door to return to the cross bridge, then go to the middle and pull the lever that has been revealed to lower the bridge; you fight the enemies that appear in the water below if you wish, then run south-west to a metal wall that lowers when pressed, revealing (depending on skill level) imps, knights or barons of Hell guarding a hole. Drop down the hole to see two demons guarding a yellow skull button that you can press to finish the map.