MAP10: Termination Center is the tenth map of Community Chest. It was designed by Samuel "Kaiser" Villarreal, and was inspired by TNT: Evilution MAP18: Mill[1], although the design style bears a resemblance to that of many levels in Doom 64. 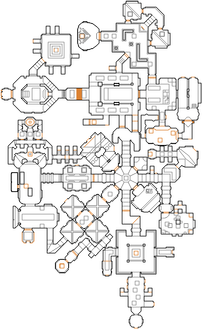 Map of Termination Center
Letters in italics refer to marked spots on the map. Sector numbers in boldface are secrets which count toward the end-of-level tally.

Go through the northern doorway, and open the northwest door. Approach the western door, and it will slide open. Go to the next door in the west, and flip the switch. Head downstairs through the northern doorway, and an elevator will lower in the center of the next room. Stand on it, and wait until it rises. Turn to the west, and flip the switch. Press the eastern switch to lower yourself again, and enter the northernmost closet in the west. Pull the switch, and head back upstairs. Go to the west of the path, and head through the opening. Step into the teleporter, and you will be taken into a green passage with a switch at the southeast corner. Flip it, and jump down.

Go through the southern door, and then through the northeast door. Take the lift up, and open the eastern door. Climb up onto the walkway using the crates, and drop into the southern hole. Once you step into the sludge, the three pillars in the room will lower. Run onto the westernmost pillar, and wait until it rises. Press the northern switch, and then the southern switch to go back down. Run through the western opening, and press the switch at the end of the hall. Go back out, and use the eastern lift. Open the northern door, and go upstairs. Press the switch north of the walkway, go downstairs, and then press the other switch to open the door.

Open the northern door, and then open the southwest door in the next room. Press the switch at the end of the path, and then the next switch behind it. Go back in the previous room, and open the western door. Grab the red key, and return to the nexus. Go through the red door to the south, and head on until you find a pillar with four switches on it. Each of these switches raises a pillar in the southern room. The eastern switch raises the first pillar, the southern one the second pillar, the western one the third, and the northern one the fourth. Press each of these switches three times, and jump across them to the southeast alcove. Hit the switch, and return to the previous room through either one of the teleporters at the east and west. Enter the eastern room, and flip the switch. After this, flip the eastern switch once, the southern one twice, the western once thrice, and the northern one four times. Go up the stairs that you have just created, and flip the switch. Head downstairs, and go through the western doorway. Run to the end of the hall, and flip the switch.

* The vertex count without the effect of node building is 3075.