MAP10: The Black Gate is the tenth map of Requiem. It was designed by Orin Flaharty, with an ending provided by Adam Windsor (see Description). It takes place in a marble castle, and uses the music track "Lordly Might" by Mark Klem.

Twisted demons created these repulsively evil buildings, as a battleground prepared against those who step within, and otherwise a place for defensive construction and research. It used to be a group of churches and embassies, where religious ceremonies took place thousands of years before the demons took over. Be well prepared for a showdown with a big demon as you get closer to the way out ...

Thanks to Adam Windsor for providing a revised ending of Orin's level after the original file corrupted. 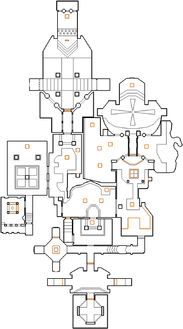 Map of The Black Gate
Letters in italics refer to marked spots on the map. Sector numbers in boldface are secrets which count toward the end-of-level tally.

Grab the medikit if you need it and turn around to open the door to the first big area. In this area there are monsters in cages, but they will teleport into the part of the room that you are in. When that is done, open the door and at the fork, go left and pick up a berserk pack. You will have to deal with demons and spectres inside each wall that opens up. Enter each closet to open another one, until the closet with the switch comes up. Press it and take the other path of the fork. In this next big area, manuever around the edge here to where the teleporter is. Enter the teleporter and pick up the plasma gun. Then, go back through the teleporter and step on the pentagram near the barrier where the barons of Hell are, and the barrier will lower. Enter the next hall and take the teleporter to appear over the lava. There is a backpack and an invulnerability on the two lifts in the lava, take them if you want to, and then follow the ledge to the next big area. Here, take the teleporter to appear in an open area. You will find a chaingunner and three similar lifts, each containing a chaingun, an invulnerability, and the red skull key. Grab the items and take the teleporter back. Now head north to the red door. In this big hall is a cyberdemon behind some bars directly ahead as well as chaingunners and imps in the side cages. Approach the bars blocking the cyberdemon to find a switch to open up the chaingunners' pen, then press the switch inside to release the cyberdemon. Kill him and then take the teleporter in his pen. In the next marble area, just kill the enemies and follow the path to the exit.