MAP10: The Hag's Finger is the tenth map of Sunder. It was designed by Insane_Gazebo and uses the music track "Sneaky Snake," originally composed by Robert Prince for Duke Nukem 3D. 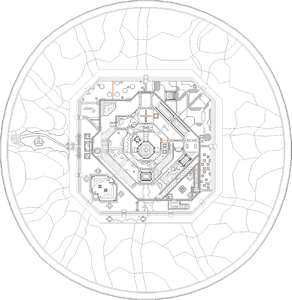 Map of The Hag's Finger
Letters in italics refer to marked spots on the map. Sector numbers in boldface are secrets which count toward the end-of-level tally.

Drop down the rocks at the start and get onto the battlement. This time, you will be offered every weapon and three backpacks, and you will need them. Head east and shoot the switch where the two chaingunners are to open the door. As soon as you enter, you will be greeted by eight mancubi and eight cyberdemons. Your best bet here is to run straight southeast instead of taking them head on. Grab the megasphere and use the next switch. This will lower the wall further to the east with thirteen mancubi behind it, but also teleport numerous monsters in your immediate vicinity, including Hell knights, demons, imps, and two arch-viles. If you lured the mancubi and cyberdemons here, then try to initiate monster infighting to buy you some time. Continue eastward. You will have to hop across the platforms outside the walls to the next switch, then make your way back up after using the switch. Six arch-viles will have teleported to the big platform from before; work quickly so that they will not resurrect too many foes.

Now go northward from there, past where the mancubi and cyberdemons initially were. Past the open door, immediately turn right and southeast to find the next switch, which will open the nearby wall containing Hell knights and two arch-viles. The switch behind them opens the door to the north. This next challenge will have you going back and forth between four switches, starting with the accessible one to the east, then another at the west wall, then east again, then finally west, all the while revenants and imps will attack from all areas. Use the pillars to dodge the projectiles, and use the invulnerability wisely.

Continue east when finished. In this area with numerous stairs, imps are frolicking in the dead gardens; get rid of them to minimize the distractions for this challenge. You will need to head up the steps until you reach a lift at the west side of this area, where you will find a switch. Use it and head back down, but be wary; pain elementals will teleport around the area and should be dealt with immediately. When you can, the next switch is by the southern door, followed by a switch further to the north, followed by the last switch which is on a high ledge to the northwest of the southern door.

The next area will have numerous pillars, and getting the megasphere in the middle will trigger the next batch of enemies, which consists of twelve revenants and twelve arch-viles. Use the cover as much as you can. You only need to use two switches here, one near the south door, and one near the north door after that. Continue south, then west and up the steps to the next area. In this area, there are three switches where the megaarmor is located. Each of these switches opens up a barred area in one of the three corners. Each of these barred areas will contain a switch that will allow access to the steps at the east end, but will also have several barons of Hell and three arch-viles teleporting in to each area. It is recommended to take on each area one at a time instead of all at once.

When it is all clear, head east and north up the steps to a platforming segment. You will have to zigzag between the platforms (alternatively, it is possible to straferun across one set of these to the platform in the middle). If you fall, a teleporter is available next to the middle platform. When you reach the middle platform, do the same thing again to reach the other side, a teleporter will be near the middle platform if you fall in again. When you make it to the other side, head northeast to the graveyard. Grab the soul sphere and press the switch, then run back to the entrance of the graveyard. The wall to the north will reveal a cyberdemon, and revenants will teleport onto the graves here. Use the cyberdemon to cause monster infighting to help you out here, then move on. There are two arch-viles flanking the exit of the building here.

Move northwestward through the alley taking notice of the ammo here, which will help you immensely for the next few battles. Approaching the big wall of skulls will reveal a horde of revenants. After them, go all the way southwest until you reach a soul sphere and two switches, one of which is blocked off. Use the one that is not blocked off and return to the north as fast as you can. The wall in the northwest corner will be open revealing a raised platform with a switch, but Hell knights and mancubi will pour out from the teleporters to prevent you from progressing. The Hell knights will seem almost endless, but it helps to go back to the alley and clutter them up together for multiple kills. When it is quiet, return to the raised platform and press the switch, then go back south to the two switches and hit the one that was blocked off. This will open the stairwell to the south of the raised platform.

Go up the steps quickly, as you will have to contend with demons and revenants who will run down these steps to attack. When you get past them, the next challenge is another one where you will need to go back and forth between switches while enemies attack you. Proceed by pressing the switch in front of the megasphere. Demons will emerge from both sides of the area while revenants while fire their projectiles from the tops of wooden pillars. It is recommended to clear the demons first in this case before mopping up the revenants. The first switch reveals a switch near the north gate, and that switch reveals one near the entrance to this area. This last switch will allow you to get past the north gate. Get past the area with dead trees, and to the east you will have to fight a single cyberdemon, which can be difficult to do as the area is surrounded by lava that has no escape routes out of it.

Press the switch behind the cyberdemon to proceed. Head southeast to fight some arachnotrons behind the next wall. One of which is in a small path to the west, which is where you should be going afterwards. Climb the steps to the top to find a spider mastermind and two arachnotrons. Go north from where they are and head northwest to a platforming segment. This will be tough to do, as you will have to be careful about your movement with each platform you go on. There are two teleporters in the lava in case you fall. On the other side, you will have an additional platforming segment leading east. This one is tougher, and there is no way out if you fall this time. After that segment, head southeast to find two cyberdemons, one of which is guarding an invulnerability. Use it quickly and keep going southwest to a switch. You will have to fight three arch-viles here, one of which teleports onto the pentagram before the switch.

* The vertex count without the effect of node building is 11083.