MAP10: The Lords is the tenth map of Scythe. It was designed by Erik Alm, and uses the music track "The Dave D. Taylor Blues" from Doom II. 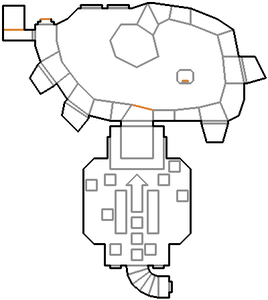 Map of The Lords
Letters in italics refer to marked spots on the map. Sector numbers in boldface are secrets which count toward the end-of-level tally.

Gather supplies here and then drop down. You will have to deal with a mancubus or two here, but climb the stairs up to where they were at and then jump down to the platform which has a switch. This releases four barons of Hell into the area. Kill them, but whenever you want to leave, head for the left path towards a berserk pack and enter the teleporter to finish the map.

* The vertex count without the effect of node building is 225.