MAP10: The Mansion is the tenth map of Memento Mori. It was designed by Alden Bates, who also wrote the megawad's story, and uses the music track "The Wind" by Mark Klem. 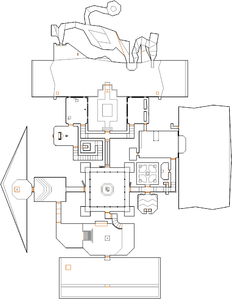 It is possible to enter secret #2 in reverse, by walking along the eastern edge of the eastern hallway, jumping to the southern edge, and then entering the southern alcove, before strafejumping to the other side, and opening the northern wall. From there, you can trigger the secret, and enter the teleporter. Doing the latter will warp you into the secret teleporter normally required to get there, which will prevent you from completing the level unless you use a noclip cheat, as the door leading in cannot be opened from the inside.

This map is one of the few maps in Memento Mori that can be completed in under a minute, and one of the few that can be finished in less than 30 seconds. The small number of enemies in this level in proportion to size compared to later levels such as MAP28: City of the Unavenged means you can zip by most of the opposition and reach the exit in little time. As a result, this level is very easy to complete under both speed and UV pacifist rules. The fastest path to the exit is the same as described above in the Essentials section of the Walkthrough.

* The vertex count without the effect of node building is 1224.