Map10: The Radioactive Zone is the tenth map of Harmony. It was designed by Thomas van der Velden (t.v.) and uses the music track "Untitled" by Kyū. The par time defined in MAPINFO is 5:50. 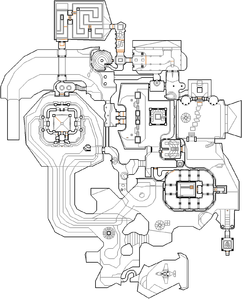 Map of The Radioactive Zone
Letters in italics refer to marked spots on the map. Sector, thing, and linedef numbers in boldface are secrets which count toward the end-of-level tally.

You can use the grenade launcher to rocket jump to the exit, because Harmony permits free-look. From the start of the map, head directly east, and there is a predator on a brown rock. Kill it, and aim the grenade launcher downward. Run forward and fire, and you will be propelled upward.

There are no official secrets on the map.

* The vertex count without the effect of node building is 4535.