MAP10: The Rats is the tenth map of 32 in 24, a deathmatch megawad. It was designed by Mephisto and uses the music track " ".

It was the thirteenth submission to the project, arriving eight and a quarter hours into the session, a significant amount of time after MAP09. According to the author, it took two hours to build. 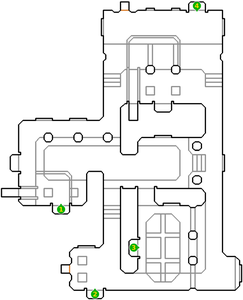 Map of The Rats 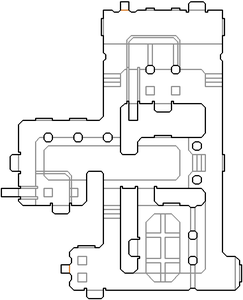 Map of The Rats

The Rats is a small sewer-themed map with moderate lighting. The slime pools found in the map are not damaging. Mephisto himself describes the level as having lots of corners and pillars which can be used for cover, whilst providing very little health.

The level is roughly rectangular in shape, with the length of the map running from north to south, plus a small additional area to the west. There are four small alcoves around the map containing super shotguns, which indicate the spawn positions. Quick travel from the north to the south-west of the map is possible by using the teleporters found at these ends of the map. The additional western portion features a ledge running along its outer wall, accessed from the western stairs in the north of the map. A megaarmor can be found on this ledge, as well as a nearby alcove containing a chaingun, both of which are clearly visible from the ground below. In between the two sets of stairs in the north of the map is another alcove, this one contains a rocket launcher.

The south-east corner of the map contains a green armor. Nearby is a BFG9000, which can be retrieved by simply running at it from the ledge. By the author's own admission, this is much easier than is normal for obtaining a BFG, the large number of pillars and corners built into the map as cover are intended to balance the easy access to the weapon.

This level contains four spawn points, the fewest of any map in the WAD. All spawn points are place on top of a super shotgun.

* The vertex count without the effect of node building is 473.