MAP10: The Stone Fort is the secret map of Disrepair. It was designed by Andrea Rovenski (Cyberdemon531) and uses the music track "City of Corpses" by Mr. Freeze (from Doom the Way id Did). The par time defined in MAPINFO is 55 seconds. 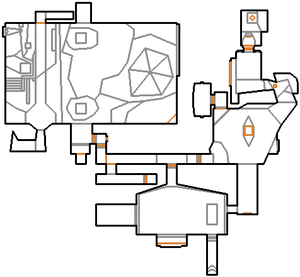 Map of The Stone Fort
Letters in italics refer to marked spots on the map. Sector numbers in boldface are secrets which count toward the end-of-level tally.

Hit the switch in the starting room, quickly run back to jump on the now-lowered platform, and head down the elevator behind the door. In the next corridor, enter the southern door, and pick up the armor to lower the wall to the red key and a host of imps. The red key barrier is in the eastern room from the corridor, head through it, and to the exit room, where a demon awaits you.

No real tactics for this map, just go fast, and hope the imp in the elevator doesn't damage you too much!

* The vertex count without the effect of node building is 465.

The Stone Fort is one of Andrea Rovenski (Cyberdemon531)'s earliest maps, and is originally from an unreleased wad.