MAP10: Toxic Touch is the tenth map of the megawad Alien Vendetta. It was designed by Kim "Mutator" Malde right after his creation of MAP09: Castle Gardens, and constructed with DEU 2 and DETH v4.16B. It uses the music track "Plasma" from Duke Nukem 3D. The deathmatch portion of this level is a remake of Quake's DM4: The Bad Place, originally designed by American McGee. The par time defined in the executable is 7:20. 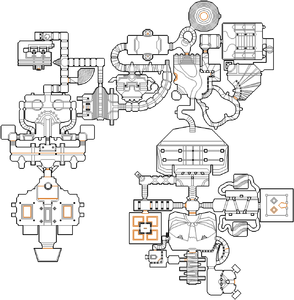 Map of Toxic Touch
Letters in italics refer to marked spots on the map. Sector, thing, and linedef numbers in boldface are secrets which count toward the end-of-level tally.

Drop down and you will land on a shotgun. Head east here, up the staircase. When you grab the chaingun, look out for a wall of heavy weapon dudes. Climb the stairs and head south, then east. You will find a switch, press it and return to the previous room to find a passage has opened. Go through this passage to the next switch. This raises a bridge in the room with the nukage flow, allowing you to access the northern door. The next room pits you into a four-intersection. You cannot go north or west, so go east down the steps. In this hall, if you are okay with wasting a few points of health, you can walk through either gate with nukage here through a tunnel leading to a room with some optional supplies. Otherwise, head into the next room, where you will get a super shotgun and the yellow skull key. Backtrack to the intersection and open the left door. Advancing through this corridor alerts several monsters, so be on the lookout for that. Drop southward into a new chamber where several zombiemen are in nukage pits. Should you fall, use one of the walls to escape. Press the switch here (there is an arch-vile hiding behind it) to open the northern door in the previous corridor, then ride the lift up to go through this corridor. At the end of this corridor is a large chamber with zombiemen and mancubi. Cross over to the other side, down to the nukage tunnel containing shotgun guys, into a big room, which may look familiar as it is where the intermission screen was taken.

There is an arch-vile in this room, and several zombies. To continue, press the switch to the east and quickly run up the steps to the southeast, dropping onto the lift that the switch triggered. Follow this hallway around, through the rooms until you find the blue skull key. Now take the stairs up to the blue door here, and you will wind up in a corridor filled with zombiemen. Take the left route in this corridor and jump out the window back to the intermission screen room. Now you should enter the door to the north. You cannot open the door to the next area, so climb the steps up to the nukage-filled room with the plasma gun. Take the gun, being wary of teleporting demons, and the door should be open. Head through this next passageway following a linear path until you get the chance to go right. Do so, and you will find a room with imps and shotgun guys. More importantly, the red skull key is here, so take it and then proceed down the hall again. You will eventually find a room with revenants, with a switch behind bars. You can actually open these bars directly, and the switch here opens the other set of bars in the room. Follow this next corridor to a fork, in which you should turn right. Go through here, entering through the hole in the wall and following the simple path to a switch. Make sure to press it otherwise you cannot continue down the other path at the fork. Once you press this switch, go through the other end and herein lies another large chamber. Get onto balcony level here via either staircase, and then take the paths that continue southward, watching out for a wall of shotgun guys as you traverse the staircase on either side. Flip the switch here to the next area. The wall opens revealing an arch-vile, and a spider mastermind in behind the pillar, guarding the level exit. 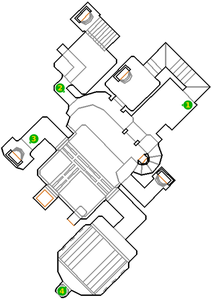 * The vertex count without the effect of node building is 6003.