MAP10: Type A is the tenth map of 1000 Line Community Project. It was designed by Nootrac4571 and uses the music track "Sick Building Syndrome" by James Paddock (Jimmy), taken from the Harmony MIDI Pack. 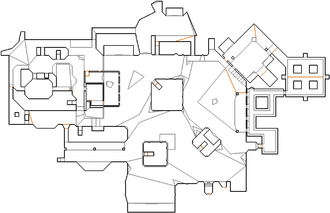 Map of Type A
Letters in italics refer to marked spots on the map. Sector, thing, and linedef numbers in boldface are secrets which count toward the end-of-level tally.

Press the gargoyle switch in front of you to lower a lift, which will take you up to a room with a shotgun surrounded by imps. Go through the west door to an outdoor area filled with blood and head south, watching out for demons and imps that teleport in behind you; once you reach a pink flesh wall, go east and press the gargoyle switch in front of you to be taken down to a brick tunnel with a super shotgun. Follow the tunnel north past some demons and spectres to a square room containing a chaingun - when you take the weapon or walk past it, platforms will lower revealing imps and/or revenants. Go north-west to a metal lift and ride it up to get on top of the bookcases around the starting room, then follow the path until you go round a corner leading to a narrow archway - watch out for three walls that open to reveal imps and demons. After going through the archway follow the fenced path into a narrow passage, collecting an armor on the way.

Follow the passage round the corner to a rocket launcher, use it to kill some cacodemons that are released from a closet behind the fence then kill a demon and step on the lift it was occupying to return to the blood-filled outdoor area. Head south-west past some boxes of rockets to a set of steps, killing any demons waiting at the top before following the path north and west to some ammo guarded by a Hell knight (and a baron of Hell on Hurt Me Plenty (HMP) skill level or higher). Head west through an archway and follow the passage behind it to a berserk pack then continue east to a gargoyle switch - when you press it you will see a door open through the fence, but some revenants will be released into the area as well. Head back to the top of the steps you just climbed to go through the now-open door, then press the gargoyle switch to lower a lift and ride it up to a room with bloodfalls.

Go through the room and turn left to see a mancubus and imps guarding two gargoyle switches, then press either switch to lower a lift that will take you up to the rooftops. When you step onto the roof some imps will rise from the floor in front of you, along with demons and one or two mancubi to the west. Follow the roof west to a narrow alley containing a plasma gun and a revenant or arch-vile (which may teleport behind you) then continue south to a pair of archways - you will see more imps rise from the floor ahead as you pass under the arches. Step on the metal lift on your right to be taken down to ground level, kill one or two more mancubi then head east to get back to the blood-filled outdoor area where some revenants and imps are waiting. Continue east until you walk past a gray wall then turn right to see the exit door in front of you.

Next to the exit door is a gargoyle switch that will open doors in all three of the square towers in this area, as well as lowering all the flesh barriers; it will also open two closets containing mancubi and arachnotrons as well as allowing a number of imps and revenants (plus an arch-vile on HMP or higher) to teleport in. Check the now-open doors in each tower to find a gargoyle switch that will lower when pressed, revealing a skull key behind it. Picking up all three keys will automatically open the exit door; step through it and press the skull switch to finish the level.

The skull keys in this level serve no purpose; entering their alcoves is sufficient to open the exit door, and there are no locked doors in the level.

* The vertex count without the effect of node building is 747.