Plot: After getting a glimpse of their experiments you just hope that the internal UAC strike force was more successful in the primary portal area. 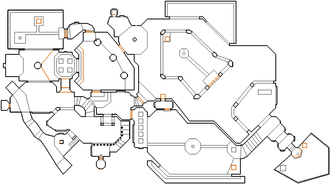 Map of UAC Experimentation Labs, High Security Area
Letters in italics refer to marked spots on the map. Sector, thing, and linedef numbers in boldface are secrets which count toward the end-of-level tally.

There are a lot of bad guys nearby the start area, but the pillar in front of you prevents most of them from seeing you initially. Firing a shot will bring a chaingunner and a couple of shotgunners toward you and you can pick off the pair of bad guys you can see hiding to your immediate left or right without moving, to reduce the numbers a little.

As you move around the pillar you will alert several zombies in the next room and also trigger several revenants to raise out of the floor. Your next task is to press a pair of switches, which are both accessible:

Head straight ahead into the courtyard and deal with most of the remaining zombies before heading through the door opposite to be presented with a large cage, in the middle of which is the red key and blocked by blue bars. For now though, you simply need to press the switch to your left in the top left corner of the room.

This switch raises a bridge allowing access to the blue key.

Take the lift to your right, but watch out for the cacodemons and lost souls at the bottom and head left up the stairs until you find a small set of stairs to your right leading down to a nukage river. Just in front of the river is a small pillar, on the back of which, you will find a switch that raises a bridge allowing access to the red key, once you also have the blue key. Note the exit door in front of you before you turn right to the nukage river.

The blue key can be accessed from either switch location. From switch 1 head to the other side of the cage and head up the stairs before taking a right. From switch 2 head under the blinking lights you can see from the switch and take the bottom right door.

With the blue key in possession, head to the cage, open the bars and grab the red key. Then head back to the area where the second switch and exit are located. Use the red key to open the door and press the exit switch behind.