MAP10: Un-named118 is the tenth map of 1 Monster. It was designed by "sausage" with later edits by Robert Eckhardt (Ichor), and uses the music track "LAST FIGHT" (boss1.mid) from the freeware shooter game Another Zero.

Like all maps in the megawad, the map features only one type of monster, in this case the pain elemental. It is set in and around a brown brick fortress, with a number of lava pools and rivers present. 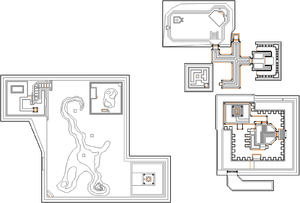 Map of Un-named118
Letters in italics refer to marked spots on the map. Sector numbers in boldface are secrets which count toward the end-of-level tally.

Enter the door to the east, head up the lift and press the two switches. The northern switch opens up the bars blocking the door to the west of the crossroads; the southern switch opens the exit door from this room. Leave the room and enter the western door. Press the switch to lower the yellow key, then grab it. Go back and open the yellow door to the north, and press the switch beyond to open up a third teleporter. Go south, teleport back and enter the newly-opened gateway.