MAP10 is the tenth map of 2 Sectors. It was designed by Fishjimboding.

An updated version of this map, received after the contest deadline, was included as MAP17. 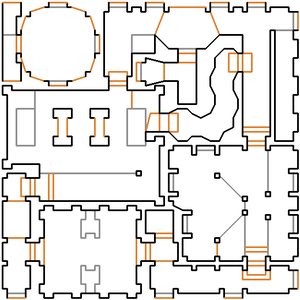 Map of MAP10
Letters in italics refer to marked spots on the map. Sector, thing, and linedef numbers in boldface are secrets which count toward the end-of-level tally.

Open the door on your right and step through it; a backpack will be revealed on your left, and on the right is a passage with a chaingunner and two zombiemen. Go to the end of the passage and open the door here to find a room with many barrels and a pain elemental; the room will also darken as you enter it. Blow up the barrels by the east wall, which will allow you to take the red skull key in the north-east corner, then use this key to open the north door leading out of the room.

The next hallway contains two imps on I'm Too Young to Die (ITYTD) and Hey Not Too Rough (HNTR) Skill level#Doom and Doom II skill levels or two demons on Hurt Me Plenty (HMP) or higher. Go to the T-junction at the end of the hall and kill an arch-vile on your left, then turn right and walk through a false wall with a blue flag on it to find a blue keycard under a Commander Keen. Go back to where you fought the arch-vile and try to open the door in the north wall, which will actually open a wall behind you - step through it (there is an invulnerability powerup here on ITYTD and HNTR) then turn right and approach a skull rock.

You will be teleported to a room containing a baron of Hell on ITYTD and HNTR, arachnotron on HMP or spiderdemon (which will be telefragged due to its size) on Ultra-Violence and Nightmare skill levels. Open the west wall and turn left to see the exit switch (you can also turn right and walk through the wall to find a secret exit, but this is redundant as the WAD does not include any secret levels).

If you enter the west room in this level and press the switches, you will find that the switch to open the doors requires a yellow key. Look in the north-west corner of the room to find an armor, then step through the vented metal wall next to it to find a yellow keycard; there is a second vented metal wall on the south-east side of the room hiding a super shotgun. (DO NOT try to pick up the BFG9000 in the north-east corner of the room, as approaching it will trigger a lethal crushing ceiling.)

The red and blue flags in the starting room are false walls; walk through them to find an armor and chainsaw. There is another false wall south-west of the arch-vile concealing a partial invisibility.

Go to the south-west corner of the red key room to find a megasphere behind some barrels.

As you step into the hallway north of the red key room you will see a wall shut on your left; this wall can be opened again if you have the yellow key, revealing a passage leading to a second door requiring the blue key. Open this door and you will be able to take the BFG in the yellow key room safely.

The player 2, 3 and 4 starts (Things 153, 155 and 154) and the three deathmatch starts (156 through 158) have no flags set for any of the three difficulty classes, but because of special handling in the engine, they function normally in the level.