MAP10 is the tenth map of Dystopia 3. It was designed by Anthony "Adelusion" Czerwonka and Iikka "Fingers" Keränen and uses the music track of Heretic's E1M5. 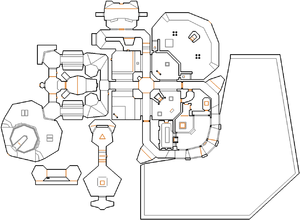 Map of MAP10
Letters in italics refer to marked spots on the map. Sector, thing, and linedef numbers in boldface are secrets which count toward the end-of-level tally.

The penultimate map of Dystopia 3 is a difficult "switch hunt" set in an expansive techbase. Traps and teleporter sequences abound in this level, so use great caution.

You begin in a silver room facing three doors - a big silver door flanked by two dark grey doors. Pick up the shotgun and box of ammo. As you approach the medikit, the two dark grey doors will open, revealing alcoves with chaingunners (right alcove is empty on Hey, not too rough and below). Flip the switch in the left alcove to open the big silver door, revealing a room with yellow and black stripes on the walls. Kill the shotgun guy and two zombiemen inside (all not present on Hey, not too rough and below), then collect the armor.

Notice panels with chevron-shaped stripes on the north and south walls. Each of these are platforms. Use either one (beware of a chaingunner waiting on each platform on Ultra-Violence and above) and ride it up to one of a set of two symmetrical corridors. Follow each corridor around (killing, in order, an imp, a shotgun guy and a pain elemental, followed by two zombiemen) to come to an elaborate (locked) door. Collect the super shotgun in front of it, then flip the switch on the wall to the right (south) of the door.

Head to the southwest side of this series of corridors. A new area will have opened up with a slime vat. Ignore it for now and take the platform back down to the room with yellow and black stripes. A new alcove will have opened in the west of this room, with a revenant (not on Hey, not too rough and below). Grab the backpack and flip the switch in this alcove.

Ride the southern platform back up - you will avoid dealing with up to two chaingunners and a mancubus in close proximity. In each of the symmetrical corridors, a wall will have lowered, revealing up to three imps each. The raised area in the southeast (where a pain elemental came from) will also have lowered, revealing a medikit, a box of ammo and a box of shells (Not on Hey, not too rough and below). You probably should clear out the symmetrical corridors of monsters (including the area with the slime pit in the southwest) before progressing the map.

Once ready, head to the elaborate door in the east to find that it has opened. Watch for up to two demons, as well as chaingunners and zombiemen in the pillboxes to either side. On Hurt me plenty and above, there is a chaingunner that is positioned in ambush in the western sides of the pillboxes, so stay alert. Equip your best weapon, then use the chevron-striped wall in front of you. This lowers an octagonal platform, which will be called the "central platform". On Hurt me plenty, you have a baron of Hell to deal with. On Ultra-Violence and above, you have an arch-vile, which you better take out quickly.

From the lowered octagonal platform, head north. Kill the imps in the (seemingly) isolated corridor with the blue key. As you approach the door ahead, the door automatically opens, releasing two demons (not on Hey, not too rough and below). Head down the corridor and deal with the Hell knight, along with the shotgun guys and chaingunners in the currently inaccessible area to the north. Continue down the corridor, kill up to two shotgun guys and you will end up in a room with up to three imps. Grab the chaingun, box of ammo and box of rockets, then flip the switch on the west wall.

This switch lowers some walls, allowing access to the blue key, but leaves you in a crossfire between up to four mancubi from two different directions. If you have the rocket launcher, then this will be easier. If not, you're better off dealing with them as you backtrack (first set east of the corridor north of the central platform; second set south of the corridor west of the central platform).

Backtrack to the area with the slime vat in the southwest of the symmetrical corridors. Head up either flight of steps and open the metal panel flanked by blue lights, then flip the switch behind it. This raises a step in the walkway in the vat containing the yellow key, allowing you to get back up after you have collected it. Step down onto the walkway and collect the yellow key. This causes two pillars to lower, releasing up to two revenants and two imps. Use the newly-raised step to get back up, then deal with the released enemies.

Next, head back to the central platform. Lower it, then take either the east or south passageways. These lead to a looped corridor with up to four imps, four chaingunners and four barons of Hell. Close to each door is a raised platform with a shotgun guy and chaingunner (not on Hey, not too rough and below). The southeast of this room contains to a room with up to four chaingunners and a Hell knight. This room's entrance is blocked by a raised block with a switch. Flip this switch.

Go to the north of this looped corridor and find the door on the south wall. Go through it to a small passageway. Open the grey wall at the end to access a room with two computer panels and a red door. Kill the zombiemen and chaingunners (if any), then flip the switch on the newly-raised block in the southeast.

Backtrack to the central platform, then go north again. In the northern part of this corridor, just opposite the inaccessible area, a trap will open with a cacodemon (Hey, not too rough and below), a cacodemon and a baron of Hell (Hurt me plenty), or a baron of Hell and a revenant (Ultra-Violence and above). Kill them, then continue down the corridor to the room where you found the blue key. A new switch is revealed on the north wall. Flip it, then head back into the corridor.

The inaccessible area in the north of the corridor is now unblocked. As you step into it, two traps open in the back of that area, along with one in the west of the corridor. Up to three cacodemons and one pain elemental will be released. Proceeding further into the area, another two traps will open, releasing up to two demons and two spectres. Flip the switch in the north, then return to the central platform.

You need to go back to the looped corridor, but a nasty trap has been set up that will result in a baron of Hell teleporting behind you if you proceed through the looped corridor in a single direction. To defuse this trap, go through both the east and south passageways from the lowered central platform, waking up the newly revealed barons of Hell (and on Hurt me plenty and above, a mancubus that is probably not going to be able to teleport). After each baron of Hell teleports, they will be in the southeast of the looped corridor and pose less of a threat.

Head to the southeast of the looped corridor and kill the barons of Hell. The entrance to the inaccessible room has been unblocked. A new area in it has opened and a step has been raised to allow access. Kill the up to three revenants that emerge from this area. Step up into it and flip both switches in the north. This reveals the red key.

On your way out, an alcove will open in the west with a chaingunner. Watch for it. Unless you seek 100% kills, there is no need to flip the switch in its alcove.

Go to the north of the looped corridor and find the door on the south wall. Go through it to a small passageway. Open the grey wall at the end to access a room with two computer panels and a red door. Open the red door to reveal an alcove with a blue pad, which serves as a teleporter. Once you go through this teleporter, there is no returning to the main part of the level (unless you use a secret area), so scavenge for health/ammo before going through.

This takes you a green-walled area with a triangular blue pad in the middle. Step onto the south or east side of the triangle (the west side teleports you to a secret area). This teleports you to another teleport alcove in an isolated area in the northeast of the map. You have up to two arachnotrons to deal with here. As you head towards the rocket launcher, you will come under fire from up to two chaingunners and two shotgun guys on a raised walkway behind you. Try to cause some monster infighting here. Head up the walkway and flip the switch at the top. This switch opens a door in the west of the room, revealing a revenant. Flip the switch behind it, then get back into the teleport alcove.

This teleports you back to the green room with a blue triangle. As you head south, parts of the room will open up. The immediate threat is a shotgun guy, a chaingunner and up to two imps. However, four powerful monsters - a baron of Hell, two Hell knights and an arch-vile (baron of Hell only on Hey, not too rough and below) have teleported back to that isolated area in the northeast of the map. Quickly step back onto the south or east side of the blue triangle pad, open the door and clear out these monsters before you are overwhelmed. Another door will have opened in the south, again with a revenant. Kill it and flip the switch behind it, then get back to the teleport alcove.

For the last time, you are returned to the green-walled area. The exit chamber in the south has opened up, with a metal pad with a blue circle serving as the exit teleporter. You will be confronted by up to two imps, two spectres and a shotgun guy. As you proceed further into the chamber, a wall will seal you in and a monster will be released (revenant on Hey, not too rough and below; arch-vile on Hurt me plenty and above). Evade the monster, head around the railings and step onto the metal pad from the south side to end the level.

It is possible to avoid having to collect the blue key. When in the slime vat area, straferun from the metal panel flanked by blue lights onto the walkway with the yellow key in one smooth motion. As the gap is substantial (192 units) and the slime vat is inescapable if you fall into it (it uses a deep water effect), precision is key and SR50 is strongly recommended.