MAP11: 'O' of Destruction! is the eleventh map of Doom 2 In Name Only. It was designed by Jeff King (Egregor) and uses the music track "". The par time defined in MAPINFO is 7:30. 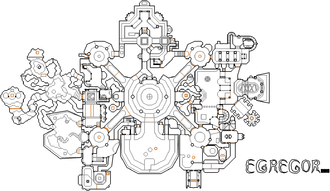 Map of 'O' of Destruction!
Letters in italics refer to marked spots on the map. Sector, thing, and linedef numbers in boldface are secrets which count toward the end-of-level tally.

All ten deathmatch starts (Things 685 through 694) have no flags set for any of the three difficulty classes, but because of special handling in the engine, they function normally in the level.

Another whopping 43 multiplayer-only things (695 through 737) have no skill flags set either, so they do not actually appear in the level:

* The vertex count without the effect of node building is 5131.