MAP11: Arch-Violence is the eleventh map of Plutonia 2. It was designed by Adolf Vojta (Gusta) and Thomas van der Velden, and uses the music track "Become the Hunted" by James Paddock. The par time defined in MAPINFO is 3:30. The level itself is a sequel to MAP11: Hunted from the Plutonia Experiment consisting with a maze filled with arch-viles though the maze is much larger in size than the original version and requires all three keys. 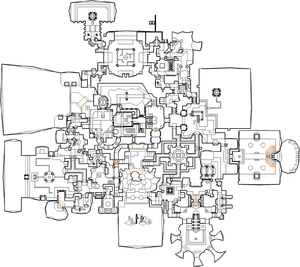 Map of Arch-Violence
Letters in italics refer to marked spots on the map. Sector, thing, and linedef numbers in boldface are secrets which count toward the end-of-level tally.

Shoot the switch to begin, and then grab the backpack, where you will topple down. When you attempt to grab the super shotgun ahead, it closes, and several arch-viles converge in. Run down the right path, around until you get the weapon. Keep on your toes as you traverse this vast level. You first need the red and blue keys. The red key is in the southwestern part of the map, across a few thin walkways, while the blue key is in the northern part of the map, where a nasty arch-vile ambush takes place when you get the key. To lower the red key's pedestal, head for the island west of it and hit the switch behind it, looking out for two arch-viles upon pressing it.

When you have both keys, head as if you were going for the red key, and close to Secret #2 is a stairwell. Take it, then go north across the bridge. Open up the blue bar, then the red bar, and keep going. Hit the lion switch and jump out of the window where you will see the yellow skull key. Go around it, northward and west, across another bridge where arch-viles attempt to ambush you. Enter the next room where there will be stairs and a hole. Climb the stairs for some boxes of rockets then jump through the hole. You cannot open the door here, but you can turn right and approach the pipes, which will lower for you. Ride them up, take out the next arch-vile, then enter the opening to the left. Follow the seemingly underwater passage to a room with a soul sphere. An arch-vile is to your left, dispose of him and enter his confines to find a skull switch, which opens the door behind the soul sphere (which you can get by simply using the pipes). Past the door is another skull switch, press it, and then head back. The door you could not open before is now open, with two arch-viles and the yellow key now available.

From that point, go back to the first super shotgun you saw. You may remember three switches behind the gun. Now you can press these switches, so do so. Press the lion switch, and a path east will open. Kill the arch-viles that appear and head eastward. Stepping on the exit, you will realize that it is a fake one, and the wall opens up to an empty area with some supplies in the middle. Running up to the bar makes it lower slowly, while arch-viles will attack from all around. When the bar lowers, hop into the void and watch your health dwindle until the level ends.

Exiting this map the regular way will cause you to start the next map with 10% health or below. However there is a way to start it with a 200% blue armor:

There are two (three on easy skill levels) blue armors in this map:

Also either reserve some rockets or (recommended) four medikits or a berserk pack to fill up your health to exactly 100% and (not needed on ITYTD) a stimpack to give you 10% health more when needed.

After pushing the switch that was blocked by yellow bars, a wall northeast of it will lower, revealing a square shaped room, containing two times 15 bullet boxes and a fake exit. Walking over the fake exit lowers the eastern walls of this room, revealing the "final battle" area, containing six bulk cells and a megasphere (and, on medium and hard skills only, eight medikits).

Grab the megasphere and climb the stairs, causing some arch-viles to teleport in. Run back to the west and perform an arch-vile jump to escape the area. From above, kill the arch-viles that cannot follow you up there.

After you cleaned the area, carefully lower your health to 10% or less, by either firing rockets at a near wall, receiving blast damage, or (recommended) by visiting sector 1655 that has a type 16 damaging floor:

First make sure your health is divisible by ten without remainder by picking up the aforementioned health items (but not the stimpack).

From the place where the blue skull key was found, follow the southwestern corridor to an area with a blood filled floor on the northern and southern side, separated by a stone floor bridge and a blood pit. Falling into this blood pit will deplete your health by 20% (or 10% on ITYTD) per second. (Note that this damage is shared with your armor if you are still wearing one.) When your health reaches 20% (10% on ITYTD), leave the pit by running to the western open area which will teleport you back on the stone floor bridge. Now (not on ITYTD) get the reserved stimpack mentioned before to reach 30% of health. Drop down into the pit once more and quickly leave it when your health is low on 10%.

Then pick up the reserved blue armor, cross the final battle area, climp the stairs once again and drop down into the hole to finish the level:

There is a type 11 damaging floor on the ground which means that the player will receive damage until his health is lower than 11% and then the level is finished. As you are on 10% of health yet, you will not receive any more damage but finishing the map instantly, keeping your full blue armor for the start of the next map. (Trying to finish the map just after picking up the megasphere would reduce both health and armor until the map ended, resulting in a worse condition for the next map.)

* The vertex count without the effect of node building is 6709.