MAP11: Beyond Pain is the eleventh map of Community Chest 2. It was designed by Dennis "Exl" Meuwissen, who is miscredited as "Exile" in both the megawad's text file and the map's intermission screen title graphic. 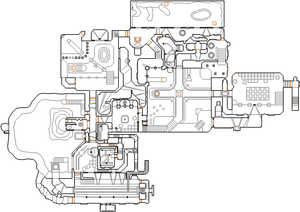 Map of Beyond Pain
Letters in italics refer to marked spots on the map. Sector, thing, and linedef numbers in boldface are secrets which count toward the end-of-level tally.

This map is nonlinear, so make sure you know where you are going. You can get the keys in any order you wish, but you need all three to exit. It is recommended to get the yellow key first, as the blue and red keys are close to each other and also closer to the exit than the yellow key.

To get the yellow keycard, head into the building complex and take the elevator, and at this point head to the door across from the elevator. In this cargo bay, hit the switch that is close to the lift on the right hand side of the entrance to lower it. Ride it up and hit the switch in the next room. You will have to shoot a lost soul and a switch here to enter the vents. Inside the vents, when it comes to a fork, turn right, and gently drop down and you should land on the yellow key. To exit this cargo area, hit the switch to lower one of the crates, and then take the door on the east wall (it is closest to the northern door, also you can do this before getting the yellow key which makes your escape more convenient). Follow the path and you should appear in a small room with a switch on the southern wall. Flipping this allows you to leave the cargo area.

To get the blue keycard, exit the cargo bay to the north and keep going through the north door. The key is behind metal bars in this open area. Flip the lion switch on the eastern wall to open a passage, and press the switch at the end of the path that forks left (the other switch in this room is a simple light switch) to raise two of the bars so you can grab the key.

The red key can be grabbed right after the blue key. Either take the door to the northeast, or take the teleporter to reach the next hallway. There are bars blocking access to the other side of the hallway. To lower them, take the door southeast of the teleporter and hit the switch at the end. Back at the hallway, enter the first door on your right and the key is right there (do not bother pressing the switch here unless you want to release lost souls behind a computer panel).

Make your way to the four way intersection with nukage in the center of the map. There are several ways of reaching it, but from where the red key is, go east down the hallway, take the door and avoid the staircase as you keep going along the hall. Hitting the switch here opens a way into the intersection. The central pillar in the middle of the intersection has three lion switches, hit the one facing eastward to open the eastern door. In this area with stacked crates on the northern wall, climb the stairs and head straight at the fork (going left will eventually lead you to a megasphere, grab it if you need it). Jump across and hit the red and blue switches to open two doors back close to where the stairs are. Then open the yellow door and ride the elevator down to the exit.

The lake east of secret #1 does not appear to have been built correctly. There is a "surface" sector and a "bottom" sector, as if it were to use the vanilla Doom deep water effect, but the bottom sector's linedefs do not reference it on both sides, and they are untextured; as a result, the surface level's floor texture bleeds over the sides while leaving the bottom sector's floor untouched. It is possible that this was originally constructed properly, but during compilation, it was mistaken for an error and "corrected."

A shotgun guy (Thing 78) in the south has no flags set for any of the three difficulty classes, so it does not actually appear in the level.

* The vertex count without the effect of node building is 3900.