MAP11: Borderlands is a level in Strife, which serves as a hub that connects to several other areas. This level also introduces the templar as a regular enemy. It uses the music track "Danger".

After being directed by Macil to find the Oracle for help with finding the remaining Sigil pieces, the Strifeguy passes through the borderlands en route to the Oracle's temple. Later, he must head north through a fortified area to enter the bailey of the Bishop's fortress. Depending on certain choices made during gameplay, the Strifeguy may also need to return here to reach the Order commons. 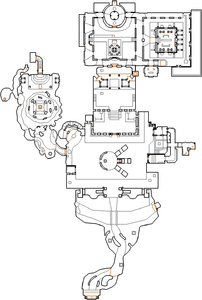 Map of Borderlands
Letters in italics refer to marked spots on the map. Sector, thing, and linedef numbers in boldface are secrets.

You first enter the borderlands from Tarnhill. Start by following the rocky path in front of you until you see a metal tower, which will open to release a sentinel when approached. Keep following the path across a bridge, then head forward through a metal archway and you will reach an open area with an ivy-covered structure in the center that resembles a Sigil symbol. In the middle of this structure is a teleporter that will take you straight back to Macil; this will be useful later. The area is guarded by a number of stalkers and acolytes; the latter enemies are particularly dangerous here as they can shoot you from a long distance. Go west from the ivy-covered structure and head towards a doorway on the other side of a water stream.

Go through the doorway into a cave, and follow the rock path north to a brick structure with a square central pillar. Go round this structure to see a block with a blue face on its south side. Either side of this block are booths holding red acolytes - kill either of them and take the Oracle keys they drop, then use this on the blue face to open the door ahead. Go through this door to enter the temple of the Oracle.

After speaking with the Oracle and using the teleporter next to it, you will appear on a teleport pad that was hidden in the brick structure south of the temple entrance. Go south from here and leave the cave, then go east around the ivy-covered structure towards a wooden building and a large door marked "Commons". Go through this door, turn left and follow the corridor to find a door that requires the Oracle Pass. Go through and speak to the Keymaster, who will give you a Military ID.

Leave the building and go back to the brick structure, then look north to see a castle-like wall with a dragon door. Go to the door and use the card reader next to the door to open it. Behind the door you will encounter the first templar of the game, or two on Veteran skill level or higher. If you have avoided making any noise up to this point then they will not attack immediately, otherwise be ready to fight them off. Go forward up the stairs and head straight forward to a large silver door; use the card reader to the left to open the door.

Go through the door and you will set off the alarm, if it is not active already. Turn right, then left and then right again to enter a brick building. BlackBird will suggest you take an officer uniform to help you blend in; kill the acolytes in this room and take the uniform from a nook in the east wall, then kill the templar which teleports in behind you. Leave the building and head due west around a column to a set of steps, leading into an area with some kind of moving ceiling. Press the button just north of this ceiling to raise a bridge over the pit ahead. Go east or west up either set of steps and head north, then turn left/right to see a window into a round room guarded by a templar. Follow the bridge you raised earlier to a door, go through it and head forward to a door leading to the fortress bailey.

If you choose to side with Macil and kill the Oracle, he will direct you to visit the Order commons for your next mission. If you use the teleporter next to Macil, you will return to the ivy-covered structure in the center of the borderlands. From here, go east to the door marked "Commons" and head through it. Behind this door is another door that requires the brass key given to you by Macil; open the door and head through to the commons.

In the building with the officer uniform, the gray acolyte here will drop an Order key when killed. If you leave the building, turn left and head towards the wall ahead, you will see a door on your left that requires this key. Behind the door is a storage room with plenty of ammunition, as well as various weapons and two metal armor pickups.