MAP11: Brown Building is the eleventh map of 32 in 24, a deathmatch megawad. It was designed by OobyDoo and uses the music track " ".

This was the fourteenth submission to the project, arriving eight and a half hours into the session, seven minutes after MAP10. It was the authors first speedmap, and took about one hour to build. It was not intended to have a custom music track, but due to a mix-up during compilation, it was given the music track intended for MAP12 instead. 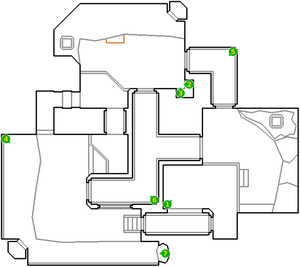 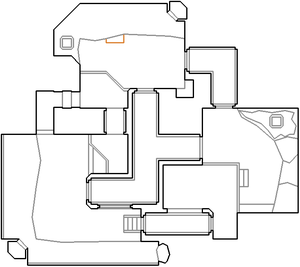 Brown Building is an accurate description of the map. Small and moderately lit, it features three outdoor areas in the south-west, south-east and north of the maps, linked together by a network of corridors running through a small brown building. The building features no interior rooms, and apart from some ammo, only the chaingun is present in the corridors. Therefore the map is more focused on its outdoor areas.

The south-west outdoor area is the largest. The ledge is accessible either by running on to it from the eastern steps, or by either of the two spawn points located on it. A small hut is in its south-western corner, and contains a plasma gun. There are two connecting passages to the northern area that avoid the main corridor - the easternmost of these contains a green armor.

The northern area is significantly smaller. A super shotgun can be found here, placed on the grass. Players can take the lift to access the northern cliff, where the BFG9000 is found. There is a five second delay between the lowering of the lift and its return, so players must fend off opponents while they wait in order to get the BFG. Another small hut is on this ledge, containing a medikit. The south-east corner of this area features a raised in the alcove in the side of the building, containing a megaarmor. This is only available for players who spawn at either of the two spawn points inside.

The south-east area is the middle-sized of the three. The rocket launcher is available here, accessed by going up the steps around the edge of the area.