MAP11: Cave Culture is the eleventh map of Sunlust. It was designed by Daniel Jakobsson (dannebubinga), it uses the music track "Mist" composed by Stuart Rynn. 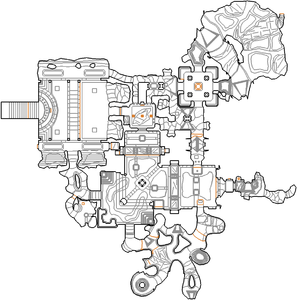 Map of Cave Culture
Letters in italics refer to marked spots on the map. Sector numbers in boldface are secrets which count toward the end-of-level tally.

The player always starts the level with pistol start. There is one key on the level.

Go forward and use the lift. Travel across the large hall and enter an opening leading to a green slime cave (there is secret#1 hidden). Walk up and you will come to a room where you can go to the left and right. Go to the left and push the button. This will open a door in the hall.

Return to that hall and turn left (north). You will be in a room with yellow door and a button. Press the button. Head into any of the three corridors. All they will lead you to a room with a rocket launcher. Taking it will open several traps. Enter any opening to the north or east. When you will be in the north east of the room, push the only switch here. Eliminate everyone and go back to the rocket launcher room. Go into the southern opening and run forward to the skull key. Take it. Return to the room where there were three corridor entrances and the yellow door. Open it to enter the large area seen earlier. Ahead is a skull switch. Push it and repulse the monsters' attacks until the metal bars are completely lowered. Next, go into the black tunnel to finish.

* The vertex count without the effect of node building is 7396.