MAP11: Circle of Death (Number One Kill The Next Generation)

MAP11: Circle of Death is the eleventh map of Number One Kill The Next Generation. It was designed by Angelo Jefferson and uses the music track "". 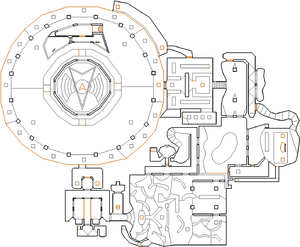 In the northern monster caches is a type-less thing (415), but it has no flags set for any of the three difficulty classes, so does not appear in the level either.

* The vertex count without the effect of node building is 1783.