MAP11: City Escape is the eleventh map of 2048 Unleashed. It was designed by Ashton Bahnmiller (Razen) and uses an untitled music track by Paul Corfiatis. 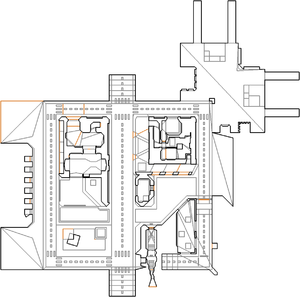 Map of City Escape
Letters in italics refer to marked spots on the map. Sector, thing, and linedef numbers in boldface are secrets which count toward the end-of-level tally.

Take the shotgun in front of you and use it to blow up the barrels surrounding the Hell knight, then turn left to destroy some more barrels which will kill imps and zombies guarding a chaingun. Head north through an open door (which will close behind you) and kill an approaching arachnotron then follow the road north and west until you see a fence on your right - the road leading away from this fence is guarded by mancubi and imps, as well as six chaingunners on Ultra-Violence (UV) and Nightmare (NM) skill levels. Continue following the road you were on west until you see a door open on your left and step through it to enter a dark passage.

Follow the passage and two lights will switch on, revealing a pain elemental waiting in ambush. Step into the doorway that the pain elemental was guarding to find a satyr switch that will lower a wall outside, then press the lion switch that was hidden behind the wall to lower a lift which you can ride up to a room with nukage. Kill two waiting shotgun guys on UV and NM, then turn right and flip a switch in the north-west corner. Now take one of the radiation shielding suits in the room and drop down the hole in the south-west corner to get back outside, then turn left to see a rocket launcher and two boxes of rockets which you may want later.

Kill the cacodemons (and, depending on skill level, lost souls and pain elementals) then go to the north-east corner of town to find that the door of the building has opened to release a number of chaingunners. Enter the building and drop down the hole on your right, kill the imp waiting on the passage ahead and follow it until you see a lift lower on your left (with a chaingunner on Hurt Me Plenty (HMP) skill level or higher). Follow the path through the building past a chaingunner (and some lost souls on HMP or higher) until you come to a triangular hole in the floor, then step across it and kill a chaingunner guarding a plasma gun and energy cells. From here, turn left and go down the steps to collect the yellow keycard then drop to the floor below.

Go to the center of town, where a spiderdemon has teleported in and a small gray building has opened to reveal a cyberdemon - get the monsters to fight each other if possible, then finish off the victor and enter the cyberdemon's building to find the blue keycard. Look south of the cyberdemon's building to find the exit door and open it using the yellow and blue keys, then drop down the hole ahead and walk towards the red wall in front of you to finish the level.

Armor and a berserk pack can be found under the step with the yellow key on it.

Drop down the triangular hole in the north-east building to find three energy cell packs. You can also get here using a teleporter in the starting area, which is revealed when you flip the switch in the north-west building.