MAP11: Cyberfunk is the eleventh map of Whispers of Satan. It was designed by Paul Corfiatis, and uses the music track "Mindgroove" by Kristian Aro. 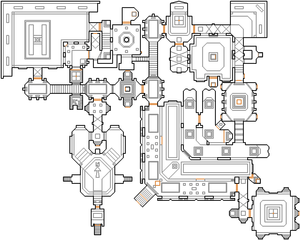 Map of Cyberfunk
Letters in italics refer to marked spots on the map. Sector, thing, and linedef numbers in boldface are secrets which count toward the end-of-level tally.

Grab the super shotgun and open the door. You will see the first cyberdemon who will teleport away when you make some noise in the room. Take the right door here and follow the hall to a Hell knight who guards a lift. Take this lift down and grab the berserk pack in the center to reveal several demons and four switches. Flip all of the switches to open the way southward. Just follow the path after that and you will get the blue skull key. Once you do, look out because several demons and spectres will ambush you, plus the cyberdemon from before is out and about as well. Return to the room he was previously stationed in from the start and take the blue door. Go downstairs and open the door straight ahead. In this large area, if you grab the chaingun, several zombies will teleport in. In this large room, the red skull key is atop a pillar on the bend of the walkway. Head for the other door, grabbing the soul sphere behind it if you need it, and then open the next door to find another room with a cyberdemon who will teleport away. Press the switch behind him and go back to the large room, to find a new area with a switch at the bend. Press the switch to lower the key, but then the cyberdemon will teleport in and guard it. Dispatch of him in order to get the key, then head back into the hallway with the stairs. Open the red door and press the gargoyle switch to reveal two side rooms with shotgun guys. Press the switches in these side rooms to open the next hall. Take note of the yellow door to the left and head upstairs. Open the door to go back outside onto a helipad. Go to the next door and keep going until you find a door and a switch to the right (with a baron of Hell in front of it). Press this switch to open the door and press the next switch to reveal the third cyberdemon, who teleports into the helipad area seen through the windows. Go back to the helipad area to kill him and get the yellow skull key, then return to the yellow door. Open it and kill the monsters in this hallway, then press the switch to open the nearby doors. Go through either one to confront the final cyberdemon guarding the exit. Kill him and leave the level.

* The vertex count without the effect of node building is 2836.