MAP11: Decade-ence is the eleventh map of 10 Sectors. It was designed by Paul Schmitz and uses the music track " ". 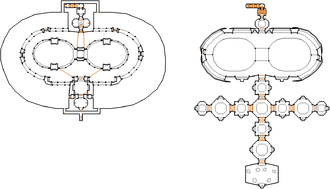 Map of Decade-ence
Letters in italics refer to marked spots on the map. Sector numbers in boldface are secrets which count toward the end-of-level tally.

The door straight ahead requires all three skull keys, so take each and every side path to get them. Note that the southern path requires either the red or yellow keys. After getting the keys, head north to the big oval-shaped room and kill the enemies you find. On the side you are on, hit the switch to the right to raise a bridge to the other side, then hit the switch on the opposite end to open the north door.

It is possible to screw the level up at this point, preventing progression further into the map. After killing the revenant, open the wall ahead, and then move back and forth in the next room until the hall with the lost soul rises. In this tiny hall is a switch. Do not approach this switch just yet, but move back and forth in this hall several times before approaching it. After doing it enough times, go and flip the switch and backtrack. You will find that the ovular room from before is much different. Dispose of the monsters here. At the southern end of the ovular room, the door requires six keys to open. Grab a radiation suit and head into the nukage, going south. In the hall with the health bonuses, press on the southern metal wall to obtain the blue keycard. Now to get the yellow and red keycards, head around either side, through the nukage, until you find a switch with a medikit on it. Flip the switch then traverse across on the half of the oval you are in until you get the key. Then do the same on the other side for the other key. Now you can open the locked door, kill the imps, then press on the next wall to find the exit (on Ultra-Violence or higher, you will have to fight a cyberdemon guarding the exit).

* The vertex count without the effect of node building is 3025.