MAP11: Execution is the eleventh map of Kama Sutra. It was designed by Adolf Vojta and uses the music track "Demons on the Prey" from Doom.

A red-cave map inspired by Erik Alm's Scythe episode3, I just added my own elements. At the end I added one cybie in front of exit. I think it is a great place for him. 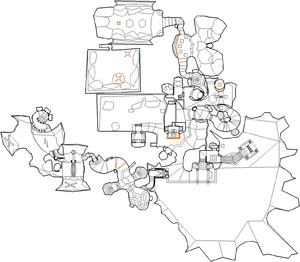 Map of Execution
Letters in italics refer to marked spots on the map. Sector numbers in boldface are secrets which count toward the end-of-level tally.

* The vertex count without the effect of node building is 3280.