MAP11: Feeding Frenzy is the eleventh level of Icarus: Alien Vanguard, set in and around a restaurant on Beta Pictoris 3. It was designed by Gregg Anderson and uses the music track "Stomp" by Jeremy Doyle. 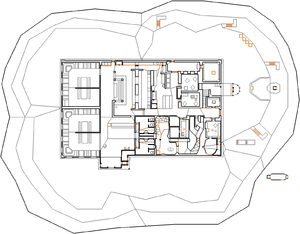 Map of Feeding Frenzy
Letters in italics refer to marked spots on the map. Sector numbers in boldface are secrets which count toward the end-of-level tally.

Kill any of the nearby shotgun guys and take their shotguns if you do not have one. Enter the restaurant, fight off the monsters and activate the control panel near the restrooms. This will open a secret door by the entrance outside, behind the puddle of blood. Run back out as quickly as you can and head through this door before it closes. (You may try this as many times as you like until you make it.) Kill the monsters inside; the berserk will help this go by faster. At the end of the passage is the blue key. Once you have it, head back outside (the secret door can be opened manually from behind) and into the restaurant. From there, head behind the counter and open the blue door to the east. Keep going east until you reach the end of the hallway and see a switch by a door to the south. Flip it to open the door, head inside, and throw the switch in the northeast corner of the next room. Climb onto the elevator it activates from the east side and a barrier will drop allowing access to another room. Blast the barrel out of the way, clear the room beyond, and press the Use key facing the red torch in the west. A door will open leading into a passageway, with an elevator at the northern end. Take it, and then head around the walkway until you can drop down onto the yellow key. Head back into the room with the torch and throw the switch to open the door out.

Back in the hallway, open the yellow door and press the skull switch inside to open the exit outside. Head around the northeast until you find a door back inside the building. Go east in the next passage, open the yellow door and step into the teleporter. Walk through the wooden arch at your destination and a switch will appear within it. Flip it and the rock wall to the east will fall to reveal a platform with a PT back to the Icarus along with a mysterious green face. Climb the northwest staircase and throw the switch to the southwest. Head downstairs in the southwest and reenter the hallway you left to find an open doorway leading into tunnels. Proceed through it, slaying the monsters, until you find a cavernous area with flowing blood. Jump into the pit, ascend the rock stairs, and enter the northernmost passage. Inside is the red key. Jump back into the pit and use the teleporter in the southwest. Head back out of the tunnels and go east outside. Press the green face and you will be lifted onto the platform. Enter the PT, use the switch in the next room to open the teleport, and step in to end the level.

The restrooms contain flushable toilets, via a button on one side. Using these will give access to a rocket in the men's restroom, and a clip and armor bonus in the women's restroom.

Using the register at the end of the front counter will briefly open a door to the north leading outside. There is not much here except for monsters, but you can pick up 4 shotgun shells in the east and a box of shells in the southwest.

Activating the register nearest the blue door (northwest of it) will temporarily open a cabinet to the north containing a medikit.

In the kitchen, climbing onto the northernmost counter will allow you to reach the super shotgun to the west. Beware, however, that approaching it will start a crushing ceiling over the gun. Note that you may quickly cross the edge of the counter and then back away before you fall off to stop the crusher at a height you can head under.

East of the kitchen is a pair of storage rooms. Of the items reachable from the floor, the northern storage room contains a medikit and an energy cell; the southern one has a stimpack, two quartets of shells and a shotgun.

The cupboard west of the cage will carry a different powerup and enemy depending on your skill level. On Hey, Not Too Rough or lower, there will be a supercharge with no opposition. On Hurt Me Plenty or higher, you will instead find a megasphere, but it will be guarded by either a Hell knight (Hurt Me Plenty) or a baron of Hell (Ultra-Violence or higher).

A pair of switches south of the kitchen are linked to two doors toward the east. The westernmost switch will open a door leading into a small room with a few monsters, as well as a box of shells and a box of bullets. The easternmost switch opens the way into a computer room with three health bonuses, two armor bonuses and 4 shotgun shells lining the desk, a medikit in the southwest corner, and a clip on a stool. Climbing the stool will cause a door to open in the southwest of the room, containing some imps guarding a medikit, a box of bullets and a radiation shielding suit.

The first elevator in the yellow key room holds a box of bullets, and will take you up to a platform where you can pick up a stimpack and a chainsaw. Heading to the southern end of the secret passage will uncover a partial invisibility.

Within the tunnel to the blood cavern, heading through the door to the stairway will open a door leading spectres inside. In the tunnel beyond it is a box of rockets and a berserk.

In the blood cavern, the tunnel parallel from where you find the red key ends in a switch that activates an elevator to the supercharge in the southeast of the room. Using it will let you collect the supercharge as well as the energy cell pack on the elevator itself.

If you fall off the platform before you can enter the PT, just return to the switch that lowered the wall and use it again. The green face switch will then be accessible again.

* The vertex count without the effect of node building is 1899.