MAP11: Frantic is the first secret map of Threshold of Pain. It was designed by John Gourley (scalliano) and uses the music track "Creeping Brutality," composed by Aubrey Hodges for the Sony PlayStation port of Doom. The par time defined in MAPINFO is 5:00. 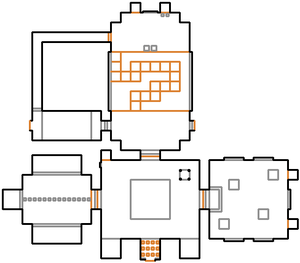 Map of Frantic
Letters in italics refer to marked spots on the map. Sector numbers in boldface are secrets which count toward the end-of-level tally.

You begin in a room with three doors - to reach the secret exit to MAP12: Vinyl Resting Place you must collect all three skull keys and use them to open the bars behind you. If you are having trouble, use the teleporter in the north-west corner to go to MAP03: Recycling Plant.

Do not take the megaarmor or soulsphere in the south alcoves as they will trigger lethal crushing ceilings. It is possible to take the armor in the north-east corner, but it will also trigger a dangerous crusher that deals heavy damage.

Open the west door and step across the small gray platforms, taking a berserk pack on your way to the blue skull key. Picking up the key causes the blood pool to become an inescapable pit, and alcoves will open in the north and south walls containing six Hell knights. Strafe across the gray platforms to avoid the knights' attacks - do not stay in the blue key alcove as it contains a crusher trap. When all the knights have been killed, the door to the starting area will open.

Open the east door and take the red skull key behind it. The floor will instantly fall away and you will find yourself in a chamber with three arachnotrons. Kill them as fast as possible (grab the rocket launcher in the south-east corner if you need it) then stand on one of the brightly-lit squares to avoid a crushing ceiling. Once the ceiling has risen again, step into either teleporter that opens in the east wall to return to the starting area, where four boxes of rockets have appeared by the west door.

Go through the north door to find a room full of teleporter pads - you must step on the correct pads to cross the room and reach the yellow skull key at the north end. If you step on an incorrect pad you will be sent to a neighboring chamber with damaging lava, along with two nightmare imps and nightmare spectres. Kill them, then press the switch in the west wall to open a door back to the start of the maze.

* The vertex count without the effect of node building is 398.