MAP11: Halls of Insanity is the eleventh map of Memento Mori. It is an alternate version of Eric Reuter's 1994 level, DM2GM2.WAD, modified by Denis Möller for cooperative multiplayer gameplay. It uses the music track "Mummy Rags" by Mark Klem. In cooperative play, the team of players is divided and separated from one another; Players 2 and 4 must fight through a different portion of the map, and meet the other players at a rendezvous point. 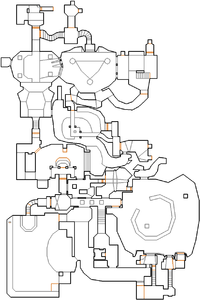 Map of Halls of Insanity
Letters in italics refer to marked spots on the map. Sector, thing, and linedef numbers in boldface are secrets which count toward the end-of-level tally.

Go north down the stairway, head west, and open the northern door. Take the blue key, and go through either one of the western openings to the blue door. Open it, and go all the way north. Open the brown section of wall to the east, and take both stairways outdoors. Go through the eastern opening, and enter the teleporter. Open the green door, go through the western hall, grab the yellow key, and head back into the teleporter. Backtrack to the yellow door, open it, and open the northeast door. Kill the spectre, and press the switch.

Player 3 starts next to player 1, and can complete the level as in single player. However, player 2 and 4 begin in a separate area. They will meet where the first blue key is located.

Players 2 and 4 will begin in the outer hallway visible from player 1 and 3's start location. They should head through an opening in the west and clear the mancubi from their perch and a nearby cage of chaingunners. Heading back out, continue north and turn left. Fall off a platform into a large square courtyard, clearing the upper terrace of shotgun guys. Find the lift in the southeast and ride it up onto the terrace, following it around to a switch. Flip the switch, and the wall in the north will lower, revealing a stairway and an arachnotron.

Head through the staircase and open the door. The windows at the eastern end of the corridor have opened up, allowing passage into another courtyard with the second blue key. Clear the courtyard of enemies, then have one player go to the southeast corner. Lower the metal panel like a lift, then ride it up to another metal panel, which is also a lift. Head into a larger room and drop into a corridor in the north wall. Open the door ahead and flip the switch on the north wall. This will lower the blue key to the courtyard floor. Backtrack into the corridor (stairs will rise), grab the blue key, then return to the room with the switch and take the teleporter in the west wall.

This will take you to a blue door. Open it and head west up the stairs. You will now be in front of the teleporter leading to the yellow key. Rendezvous with players 1 and 3 here.

From this point, the rest of the level is progressed and completed in the same manner as single player.

In spite of it being specially edited for cooperative multiplayer gameplay, none of the things in this level are flagged as multiplayer-only. This has two side effects:

Table of all things (except player spawns) reachable on multiplayer only:

* The vertex count without the effect of node building is 1203.