MAP11: Hunted is the eleventh map of The Plutonia Experiment. It was designed by Dario Casali and uses the music track "Sweet Little Dead Bunny", the music from Doom's ending cinematic. It is a maze level notable for being populated exclusively by arch-viles. 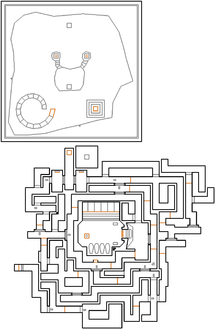 Map of Hunted
Letters in italics refer to marked spots on the map. Sector, thing, and linedef numbers in boldface are secrets which count toward the end-of-level tally.

Pressing the first switch will open the door and release the arch-viles in the starting room. Grabbing the yellow skull key will release another.

It is necessary to save health in this maze - there are no forms of health recovery until the very end. Another important tip for this level regards the doors. The doors of this maze - unlike most other doors in Doom universe - cannot be opened or closed by hitting the spacebar in front of them. Rather, walking into a specific spot of the hallways opens the doors. Such spots are often marked with narrow gray sections in the walls.

In general, it is possible to avoid getting hurt by the arch-viles if by killing them using a proper tactic. Blasting them with the super shotgun until they start conjuring the flames, then getting out of their line of sight by running around the corner. It takes the arch-vile about three full seconds to perform one attack, from when it first casts the fire to when it actually sends out the blast. Thus, timing it correctly, the player can drop these monsters painlessly.

It is not necessary to collect both keys to exit the level. Only a single one is required, be it the red or yellow skull. However, the switch that opens the yellow bars is in front of the red bars, and vice versa, so it is still necessary to traverse a sizable portion of the maze to exit.

At the end, there is a choice of two exit teleporters. The left one will take the player straight to the next level. However, the right one is a normal teleporter leading to a type 11 damaging floor room with the last four arch-viles of the level. This teleporter trap is subtly hinted at by a player corpse in the vicinity of it. When the player's health drops to 11% or lower, the level will end, and MAP12 will be started with extremely low health.

Path to the red skull key[edit]

From the starting room turn south, take the path to the west and go into the first door on the south wall that opens just as the player comes to it. Follow the path eastwards, then all the way to the north and west to a pair of opposite doors, from which the north one has opened. Go through it and east until southward turn is required, follow the bends until it is required to go east again towards an open door that leads north. Continue north and then west, until the dead end with the red skull key.

Path to the yellow skull key[edit]

From the starting room turn south, take the path to the west and go into the first door on the south wall that opens just as the player comes to it. Follow the path eastwards until passing a door on the south wall, and continue a bit north until it can be heard opening, then backtrack through it. Of the two south-bound paths take the eastern one, then go west at the next crossing, and follow all the way to the west until reaching the south-western corner of the map. Go north to the dead end with the yellow skull key under a green window.

For a long time it was believed impossible to obtain 100% kills on this map due to the four arch-viles in the alternative exit room who, along with the damaging floor, will cause the player to exit the level before having a chance to kill the arch-viles. As a result the UV max category has a special exception where the level can be exited without fighting the final four arch-viles.

However, with extreme luck one can kill three arch-viles with the only BFG9000 shot (which does approximately 3150 damage average in theory), and then dispatch the last arch-vile with the super shotgun. One can also stay on the teleport outpost to avoid the damaging floor, which allows surviving one blast from the last arch-vile. This has been demonstrated, but is not attempted in traditional UV max runs and the rule allowing players to skip them still stands, as the reliance on random chance to defeat them is considered unfair.

It is possible to avoid the releasing of the arch-viles with a well-timed opening. Use caution when pressing the first switch; as some of the arch-viles may try to attack the moment the switch is pressed. This is more common with the fast monsters setting enabled.

* The vertex count without the effect of node building is 1259.