MAP11: Mausoleum is the eleventh map of 1 Monster. It was designed by Walter Confalonieri (daimon) with later edits by Robert Eckhardt (Ichor). Depending on the source port in which it is played, it uses either the MAP05 song (a MIDI rendition of the song "Zombie" by The Cranberries), or the E1M4 song from Heretic. This is due to the presence of a FraggleScript header which changes the music to the MAP05 song.

Like all maps in the megawad, the map features only one type of monster, in this case the spectre. It is set in a graveyard with surrounding buildings, all in a wintery landscape. 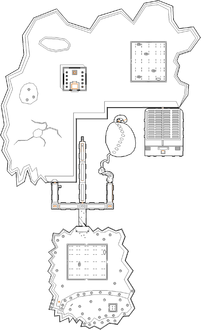 Map of Mausoleum
Letters in italics refer to marked spots on the map. Sector, thing, and linedef numbers in boldface are secrets which count toward the end-of-level tally.

From the starting position proceed forward, into the building, and head west. Go outside through the door and head towards the building visible in front of you. Press the lion switch to open the door. Go up the lift, pick up the red key, then press a switch hidden on the south-eastern column to remove the obstacle blocking the exit. Head back to the first building you entered and proceed down the corridor until you come to some red bars. Open them and proceed into the cavern. Keep moving forward and you will eventually come to the yellow key. Pick it up and head back; a cavern lit by green torches has opened in the wall nearby, containing a teleporter back to the starting area.

Go again into the building and into the other outside area. There is a yellow key door east of the small building, leading to a church. Inside the church, on the chair behind the altar is a blue key. Pick it up and go back to the first building, then open the blue door and enter the exit portal inside.

In the first area, there is a teleporter on the ground which allows you to get back to the cliff where you start the level.

A cemetery in the starting area contains a number of pickups, including a berserk in a north-eastern grave. (You teleport into the grave after picking up the yellow skull key.)

Inside the church, picking up the blue key not only causes a spectre ambush but also causes a rocket launcher and some boxes of rockets to appear before the altar and in the front pews.

* The vertex count without the effect of node building is 6352.