MAP11: My fav is the eleventh map of Japanese Community Project. It was designed by Nanka Kurashiki and uses the music track " ". The par time defined in MAPINFO is 3:30.

My fav was featured in Doomworld's Top 100 Most Memorable Maps, placing 55th. 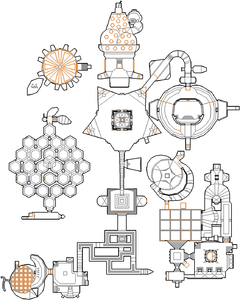 Map of My fav
Letters in italics refer to marked spots on the map. Sector numbers in boldface are secrets which count toward the end-of-level tally.

* The vertex count without the effect of node building is 4195.