MAP11: Nemesis is the eleventh map of the megawad Alien Vendetta. It was designed by Martin Aalen Hunsager and constructed with DETH v4.16B. It uses the music track "Sign of Evil" from Doom. The par time defined in the executable is 14:00.

The map is set in a giant marble fortress placed atop an island; the player begins in the water down below and must find an entry to a cavern complex through which the fortress can be penetrated. 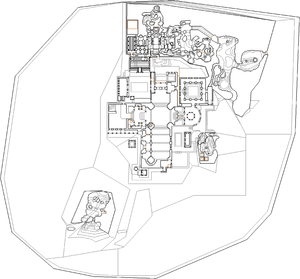 Map of Nemesis
Letters in italics refer to marked spots on the map. Sector, thing, and linedef numbers in boldface are secrets which count toward the end-of-level tally.

In front of you, climb the rocks to where the shotgun is into the cavern. Keep on climbing until you find a switch which you should press. Now exit the rocky cavern and head right. You should be able to head through the valley here, the switch you pressed removed a barrier for you to cross. Go through here, going over to the right. You might see an additional cavern to the left, go here for a backpack and armor if necessary, then continue north. You will end up in another cavernous area. You will be back here way later in the level. Climb up the nearby stairs all the way, and then climb the next set upwards.

You will find yourself onto the giant marble fortress. Head right for a rocket launcher, then head back and continue along the path. Climb the marble stairs, continually watching for monsters along the way, then climb up the next small set to where the arachnotrons are located. Go into the next room here. If you go to where the chaingunner is, it is a lift downwards to the outer ledge of the fortress, where you will find mancubi and some supplies. Otherwise, follow the marble path around the next few marble structures. You can get supplies from these places on the other end if you need them. Go north till you find an opening to the right, then head south down the steps to the grand hall of the fortress. A cyberdemon is on the opposite end. Dispose of him, and then go to the area he was in. Take the right hand side and keep going right until you find yourself back in the room with the rocket launcher. You should now be on the balcony of this room, so head south into the next room where the yellow skull key is. Grab it, and open the bars west here (they are marked by the yellow key). A spider mastermind is now in the grand hall, so dispose of him too. Keep going west, and then north, going down the next set of steps to a room with mancubi in it. Keep going north, and then east at the top of the steps, going until the opening north with more yellow bars.

Behind that, climb the stairs and head into the corridor, where the switch at the end lowers the nearby bars. Go to this cramped area and head right, down the next hallway to a brown structure, where you should head down the center of the structure and then to the left. You need to go through the very tight cavern. In the room with the small water pool, there is a room to the south with a switch. Press it to open the paths to the right, and keep going. You should find another switch along the way. Press this one and continue down the path to return to the brown structure. Head back to the middle and you should be able to obtain the red skull key. Now head out and right of the structure, finding a set of bars which requires the red key.

Behind this is an area of the cavern which ruined the next structure. Head into the ruined structure into the cavern behind it. Cross the stream and head east crossing another stream to a set of bars. There is a very small staircase near the bars leading downward, go down here and find the switch which lowers the bars. Head back up and east now. Try to find the stairs to a switch in this tight cavernous place. It should be close to where one of the mancubi is. With this switch pressed, go northwest through a rocky pass until you find the blue skull key on the waterfall. Drop down after picking it up, and find the set of bars to the north. These are blue key bars, with several demons behind them. The next set of bars also require the blue key, and they take you back to a cavern you have previously been in. Go southeast to a newly-opened passage in the river to find the exit.

* The vertex count without the effect of node building is 6419.