MAP11: Notus Us! is the eleventh map of Hacx. It was designed by Michal Mesko (msquid). 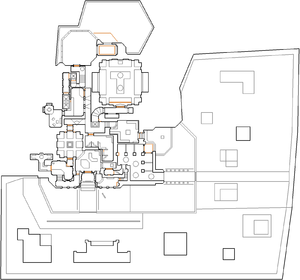 Map of Notus Us!
Letters in italics refer to marked spots on the map. Sector, thing, and linedef numbers in boldface are secrets which count toward the end-of-level tally.

Go through the door in front of you to enter the Notus lobby and destroy an android, then go through another door in the south-west corner to enter a hallway with some thugs. Go down the steps at the end of the hallway to find a photon 'zooka guarded by two phages, take the password sitting in the corner then go back to the lobby and walk north-west into a neighboring room with a large tree. Go to the door at the north side and press the red button on its left side to reveal a second button that will open this door, then press the down button on the door's right side to lower a lift.

Ride the lift up and open another door at the top, then push past a couple of thugs and androids to get to a silver pole with a lift platform on top of it. Press the button next to the lift to lower it and proceed up to a curved passage, then go round the corner to find a terminatrix guarding a door which leads to a conference room. The room will darken as you enter and two compartments will open on the east and west sides, releasing androids, phages and buzzers - slay them then go round to the north side of the conference table to find an uzi and the KeyCard. Go back to the lift and press the button on the east wall to lower it again, then drop down and head north to another door with a panel next to it that requires the KeyCard to open.

Press the panel to open it and reveal a button that will open the door, kill the thugs waiting in the next room then press the button by the west wall to lower another lift platform. Ride the lift up to confront two stealths (or a mechamaniac on "Let's rip them apart!" (LRTA) skill level or higher), then step through the doorway behind these enemies to lower another lift that goes up to a staircase. Fight your way past two androids and a terminatrix to a door and open it to confront one to three thorn things, then head through the east doorway to ride one more lift down to a grassy area. Step outside and walk in any direction to finish the level.

A cryogun can be found on the east side of the level, protected by a monstruct. You can get there either by using the lift in the garage area in the south-east corner of the map, or by heading east from the lift leading up to the conference room.

After passing through the KeyCard door, head through the doorway in the south-west corner to find a stick.

The door requiring the KeyCard can be skipped by luring an enemy behind the door to open it, thereby skipping much of the level. Do note that if playing from a pistol start, you will be rather underequipped to face the thorn things guarding the exit.

* The vertex count without the effect of node building is 1766.