MAP11: On the Origin of Spacies (Ancient Aliens)

MAP11: On the Origin of Spacies is the first map of Applied Einstein episode in Ancient Aliens and is the eleventh map overall. It was designed by Paul DeBruyne (skillsaw) and uses the music track "Space Train" composed by Stuart Rynn. The par time is 4:00. 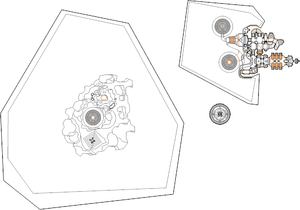 Map of On the Origin of Spacies
Letters in italics refer to marked spots on the map. Sector, thing, and linedef numbers in boldface are secrets which count toward the end-of-level tally.

There are two keys on the level. From the purple teleporter begin following the health bonuses path to a cyan door. Open the door and kill the enemies behind but do not blow the barrels. Turn right to a room and you will see a green armor and a yellow keycard to the left. When you try to obtain the card it will go up and two traps to the left and right will open. So, you can obtain the green armor and the shotgun if you kill the shotgun guy. Go back to the first door now and use the barrels to kill imps. Take the set of stairs and then enter the room to the left. Again, do not destroy any barrel here. Make your way ahead until you see a button. When you press it quickly destroy the barrels. This button, aside from the traps, also activates the lift leading to the otherwise inaccessible yellow key. Press the button again and use that lift to get the key.

Now jump off and fight the plasma aliens, then take the yellow door to the left (south). In the next area kill other enemies around. You may also obtain the chaingun by killing the chaingunners and get some items in the red door room (but you cannot open it yet). Go down the stairs to an outside area. In the outside go down another set of stairs. You will see a red key pillar and the spacecraft. Step into the field made by the spacecraft to get teleported inside it. Take a chainsaw here and kill one plasma alien. Push the button the plasma alien stood by. This opens the north side of the teleporter and spawns demons and one/two pain elementals into the spacecraft room. Cut them with the chainsaw and use the north part of the teleporter, so you will be in an entirely different area. Fight the arachnotrons and go to the bottom part. Take the rocket launcher preparing for another fight with demons and Hell knights. After that, follow the set of step up to a switch. Press it and return to the spacecraft (or find secret#1 first). There will be new plasma aliens. Press the button again to unlock the south side of the teleporter. Use that side to get back to the first area. The red keycard is now available but fight the new enemies first.

Head back through the two set of stairs into the familiar area and enter the room with two red doors. Push the switch and fight the alien guardians. After some seconds both doors will open revealing two Hell knights. The exit will be behind the door.

* The vertex count without the effect of node building is 7906.