MAP11: Rats in the Walls (Requiem)

MAP11: Rats in the Walls is the eleventh map of Requiem. It was designed by Adam Windsor, and uses the music track "Hunter's Lair" by David "Tolwyn" Shaw.

Just one of the many bases that has [sic] fallen to the demonic attack, this was once a research and development centre for the UAC, investigating the uses and processing of various non-toxic chemicals recovered from Mars and her moons. Many areas of the base are cluttered with the shielded piping used for the chemicals : this may make progress treacherous, so watch your step. Be on the look out for signs of concealed equipment bays, there are sure to be several scattered across the base. 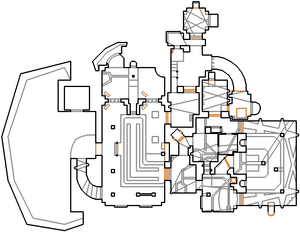 Map of Rats in the Walls
Letters in italics refer to marked spots on the map. Sector numbers in boldface are secrets which count toward the end-of-level tally.

Get the super shotgun and open the door to a fork. You need to obtain the yellow key that is in the caged area on the east side of the map. To do so, take a right at the fork you are in, then go through the tunnel that holds several ammo clips, then immediately turn left to find a door on the northeast side. Enter through here to get the key (it is best to kill all the monsters around this part of the map before doing so). After getting the key, head for the yellow door to the west of this area, and behind it, you will deal with several more monsters, mostly imps, behind a few structures. Take the steps up grabbing the chaingun and go north towards the bars with the arrow switches. Hit the up arrow switch to raise the bars, then head through the next area hitting the next up arrow switch to raise the next set of bars, to the other balcony of the bigger hall. Open the door here to the next room, then head into the next room and go up the steps to a switch. Press it to open the bars to the east. Follow this hall to the red keycard. You will then have to retrace your steps to the room before the red key, unfortunately you cannot go directly back as the bars have closed off behind you. Not only that, but several monsters have appeared in all of the areas you have been in. You will need to kill them as you head back to the red door in the northern part of the map. Kill the mancubus behind the red door and then exit.

In multiplayer, all players will be restricted to the first area of the level, with the yellow key door blocked off by a wall that is raised when you leave the start room. However, this area does not contain an exit, preventing you from leaving the level in multiplayer gameplay unless a timer has been set through the -timer switch. The Deathmatch Repair File created by Steve Terry adds an exit to this area located in the central pipe in the east of the level. In single-player gameplay, this switch will be closed off when you leave the start room, allowing the level to be completed in the intended fashion.

* The vertex count without the effect of node building is 1227.