MAP11: Refinery is the eleventh level of console versions of Doom, based on the original E2M3: Refinery with modifications made to adapt to consoles' limitations. The conversion was done by American McGee, and the original authors of the map are Tom Hall and Sandy Petersen. The map first appeared on the Atari Jaguar, and was later ported to the 3DO, Sega 32X, Game Boy Advance, Sony PlayStation, and Sega Saturn consoles. 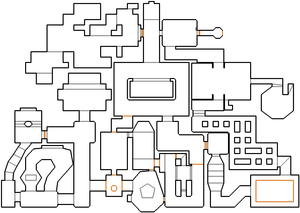 You begin facing a structure which contains one or more cacodemons. Go behind this structure to see two passages leaving the room to the south, and enter the right-hand passage. You will arrive at a nukage room, beyond which is a shotgun on a round red pedestal. Run straight through (the nukage will inflict some damage) to the shotgun.

Turn right (west) into a green marble hall. Take the right and then the left to come to a silver door. Behind this door is the blue keycard.

Return to the structure with the cacodemons and take the left-hand passage (southeast) this time. As you turn into this passage, you will see a blue door. Go through this door and follow the passageways. Eventually, you will come to a dark room with many square green pillars. Zig-zag your way northwest until you come to a room overlooking another nukage area.

Run straight through the nukage, heading north. Turn left and follow the passageways to the exit door. Head through and press the switch behind it to finish the level.

At the start of the level, there is a door on your right leading to an area with numerous monsters and pickups. These include a radiation shielding suit by the entrance, two boxes of shells in a dead end, and a chaingun at the far side of this area. A box of rockets and armor can be found in alcoves by the entrance. A berserk pack can also be found in a low-ceilinged area on Hurt Me Plenty and Ultra Violence skill levels.

East of the red pedestal with the shotgun is a small room containing megaarmor. Secrets #2 and #3 are connected to this room (see below).

Due west of the red pedestal with the shotgun is a hallway leading to a looping room. Past this room is a lava pool - head north from here to climb up a staircase with a plasma gun, which will lead to the room with the blue keycard. This staircase is flagged as a secret on PC, but not on console levels (see Bugs).

Compared to the PC version the following changes have been made:

The version on Sega 32X seems to be an earlier developed variant of the level, coming before the Atari Jaguar, which has some changes over this level:

The thin walls in the two nukage halls still exist:

The BFG9000 weapon is not yet included in the backpack secret.

The map uses the following music tracks per console ports: