MAP11: Refinery is the eleventh map of Simplicity. It was designed by Melissa McGee (Agent Spork) and uses the music track "Where Izit", originally created by Lee Jackson for Rise of the Triad. The par time defined in MAPINFO is 4:20. 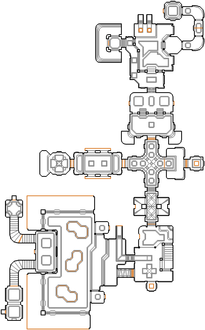 Open the door in front of you to reveal a room with imps and zombiemen (more of the same enemies will also be released behind you), then head forward to a second door and open it to reach a crossroads. Take the shotgun straight ahead, which will lower the surrounding wall to reveal shotgun guys guarding the exit door (currently locked), then go through the door at the north fork and kill some imps and shotgun guys waiting up the staircases ahead. Go up the stairs and flip both switches in the east and west walls to open the nearby skull door, then kill some more imps and shotgun guys behind it before going down to some water spouts before walking east up another set of steps. Follow the passage north past some imps to find another switch being protected by three shotgun guys.

Flip the switch and go back to the water room, watching out for two nightmare demon that ambush you in the passage, then walk back up the south steps before walking west and north along a stone path to a door that has just opened. Flip the switch and dodge the imps and shotgun guys that ambush you, then go back to the crossroads and dispose of three demons that come through the now-open south door. Go through this door to confront some shotgun guys before flipping the switch on the west wall to open the next door, then head through and slay two more demons and another shotgun guy before pressing the lion switch on the west wall to lower some bars blocking your way to the floor below. Go downstairs to kill yet more shotgun guys before opening the skull door in the south-west corner.

Kill some waiting imps and a shotgun guy, go down the steps to dispose of some waiting demons then head forward to a courtyard where imps and zombiemen guard a chaingun. Head to the north-east and south-east corners of the courtyard to find two switches and flip both of them, then fight off some imps and cacodemons that appear in the courtyard before going back to the previous room, where some bars on the south side of the room have lowered to reveal a teleporter. Enter the teleporter and kill three waiting imps (or two imps and a chaingunner on Ultra-Violence and Nightmare skill levels) then go down the steps and deal with some imps and zombies that have appeared in the next room. Flip the switch on the west wall to lower a nearby wall, then push past some imps and go down the steps to find the red skull key; watch out for two nightmare demons that appear when you reach the bottom of the steps.

With the red key, enter the west alcove to teleport back to the south-east room and kill some imps and shotgun guys that have appeared, then go back to the crossroads and open the locked east door to end the level.

* The vertex count without the effect of node building is 3153.

This level contains the following numbers of things per skill level, not including enemies spawned via Thing_Spawn or similar functions: